This autographed portrait of Johnny Cage is actually signed by Johnny himself, current Hollywood celebrity, professional martial artist, and one of the few former Champions of Mortal Kombat alongside his old friends Liu Kang and Lt. Sonya Blade chosen by the thunder god Raiden to battle enemies and rescue both Earth and all the realms from the forces of evil many times in the past.

It also appears during Johnny Cage's Babality in Mortal Kombat (2011).

Johnny Cage's autograph also made an appearance in the first Mortal Kombat movie when Johnny himself battled the undead ninja Scorpion in his secret lair within the Netherrealm before he escaped this strange, dark place, and returned back to Shang Tsung's Island in Earthrealm. 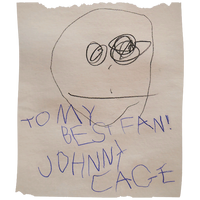 The Autograph from Johnny's MK 2011 Babality.

Autographed Keepsake
Add a photo to this gallery

Retrieved from "https://mortalkombat.fandom.com/wiki/Johnny_Cage%27s_Autograph?oldid=352965"
Community content is available under CC-BY-SA unless otherwise noted.