John Turk as Sub-Zero in MK3. 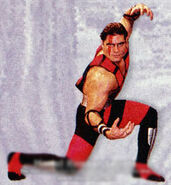 Another shot of Turk posing as Sub-Zero.

"Your soul is mine!"

Turk performing a prototype versus pose of Shang Tsung in MK3.

Turk as Kuai Liang, the younger Sub-Zero in MK4.