The House of Pekara is an ancient location in Earthrealm, and featured in Mortal Kombat: Deadly Alliance.

The House of Pekara was a place of worship built upon the tomb of the ancient Warrior Kings. It was in the labyrinth below this structure that Shang Tsung, disguised as Song, fooled the young swordsman Kenshi into releasing the souls of the kings. Shang Tsung had stolen these souls and left Kenshi to die in the tomb. The cursed ordeal left Kenshi blinded, but the sword which was the sacred resting place of the warrior kings let him out of the depths and saved him.

After he learned that the Warrior Kings themselves turn out to be his ancestors, Kenshi now has to redeem himself with only one mission: to free the spirits of his great ancient family from their unholy captor.

The House of Pekara is an age-old structure built like a holy temple hidden deep in the jungle, somewhere between Asia and Europe in Earthrealm. It is constructed upon the tomb of the long forgotten Warrior Kings and of the undisturbed monument to their age-old legacy. Hail stones and rain drops falls upon the ruins of this holy place. In the background lies a tall and beautiful stained glass window with the symbolic Mortal Kombat dragon icon. Also in the background is a statue of an old, long-haired sage or holy man sitting on a throne, holding both a two-edged sword and a staff with a falcon on it. Surprisingly, within the House of Pekara floats the spirits of dead warriors, in regal cloaked clothes, who inhabit the area. These ghosts are none other than Kenshi's great ancestors, the Warrior Kings themselves. They watched as kombatants fight each other within the House of Pekara.

The House of Pekara resembles a massive church/steeple. It is enclosed with Gothic looking architecture and a huge stained glass window in the front of the arena, featuring the Mortal Kombat Dragon symbol prominently in the center. There are statues littering this place, as well as ghosts of long dead kings that rise up and out of the ground as you fight. A massive hail storm is occurring inside this place as well. As you fight, hail drops in from the ceiling in a very violent manner. 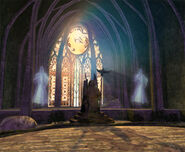 The spirits of the Warrior Kings within the House of Pekara.

The ruins of the House of Pekara.
Add a photo to this gallery
Retrieved from "https://mortalkombat.fandom.com/wiki/House_of_Pekara?oldid=329224"
Community content is available under CC-BY-SA unless otherwise noted.