These hook-like chains are called Houan Chains, that were originally used by an ancient group of people with the power of necromancy known as the Houan sect.

These shackles were once used as ceremonial relics within the Houan's rituals, especially their sacrificial rituals before the Houan themselves were destroyed by the Earthrealm's thunder god, Raiden, centuries ago.

The chains are now wrapped around Liu Kang's wristbands as a way for Dark Raiden to control him since his transformation into the undead.

During the battle towards the top of the Pyramid of Argus in MK: Armageddon's intro. The Zombified Liu Kang would use the chains and hooks like weapons as he battles his old archenemy & killer: Shang Tsung. Even managing to use it to hook the sorcerer on the back in order to prevent him from reaching Blaze. In MK 2011's Intro this seems to have killed the sorcerer as the same hooks are still lodged on his back. 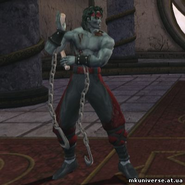 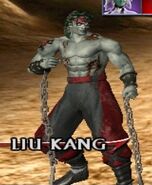 Dark Raiden uses the Houan's old rituals and the Houan Chains to resurrect Liu Kang as a zombie.

Shang Tsung's Corpse with the Houan Chains hooked onto his back.