The Heroic Brutality was first introduced and is only available in Mortal Kombat vs. DC Universe. Some of the DC characters are superheroes who have sworn an oath never to take a life. As such, instead of performing Fatalities upon their defeated opponents, at the end of a match, when the announcer says "Finish Him/Her!", they are capable of performing Heroic Brutalities, which incapacitate and severely injure the opponent to the point that they are unable to fight any further.

A Heroic Brutality still leaves the opponent alive so that they might face justice later on. In general, they are not as bloody or violent as the Fatalities performed by the Mortal Kombat characters, or even the evil DC characters.

Green Lantern's Heroic Brutality
Add a photo to this gallery 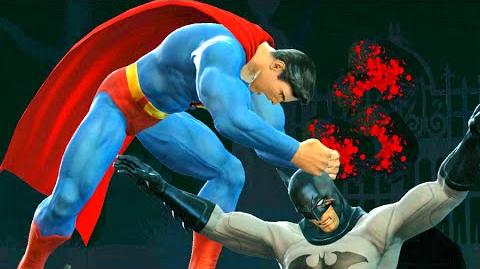 Mortal Kombat vs DC All Heroic Brutalities
Add a photo to this gallery
Retrieved from "https://mortalkombat.fandom.com/wiki/Heroic_Brutality?oldid=329261"
Community content is available under CC-BY-SA unless otherwise noted.