The Hellspawn (Hellspawns) are a skeletal type of undead beings who were capable of manipulating hellfire. They are quite similar to Wraiths/Specters.

In Mortal Kombat: Armageddon, Scorpion's entire clan were resurrected by the Elder Gods as payment for him becoming their champion and aiding them against Onaga. However, they betrayed him by resurrecting the clan as undead Hellspawns similar to Scorpion. They were dispatched to battle against Taven in order to prevent him from stopping Armageddon. This betrayal of his trust, would push Scorpion to join with Forces of Darkness to get revenge against the Elder Gods.

Hellspawns generally come in groups; while they are easy to defeat alone, they can be difficult in numbers. Larger Hellspawns also appear as giant skulls which manipulate fire.

In Mortal Kombat 11, guest character Spawn is a non-canon Hellspawn empowered with Hellfire, Necroplasm, and the parasite K7-Leetha. Jacqui Briggs is also given a outfit nearly identical to Spawn along with his release.

Taven fights off against these Shirai Ryu ninjas, now reborn as the Hellspawn. 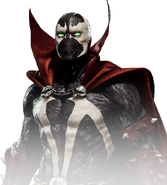 Add a photo to this gallery
Retrieved from "https://mortalkombat.fandom.com/wiki/Hellspawn?oldid=353576"
Community content is available under CC-BY-SA unless otherwise noted.