Harumi Hasashi (波佐志はるみ) also known by her 'pet' name Kana (カナ) was the wife of Hanzo Hasashi and a victim of the Shirai Ryu massacre, along with her son, Satoshi. Harumi is a minor character in the Mortal Kombat franchise, but she is one of the driving reasons why Hanzo returned as a Specter, now known as Scorpion, in order to avenge his clan and family.

Upon encountering Scorpion for the second time, Scorpion, now a Spectre, confronted Sub-Zero for destroying his clan and killing his family, and attempts to have his revenge. However, Sub-Zero was not directly respond to their death.

Sometime after his return to the Netherrealm, Scorpion learned from Quan Chi that his wife and child had been slain by Kuai Liang, the younger Sub-Zero. After defeating Sub-Zero, Quan Chi showed up and told Scorpion that he was actually the one who murdered his family.

Harumi is mentioned in Scorpion's MK: Armageddon ending, where she, Satoshi, and the Shirai Ryu clan are fully resurrected by Scorpion after he obtained the powers of a god for defeating Blaze. However, as Scorpion is reunited with his family, Quan Chi appears and kidnaps Scorpion's and Harumi's son, Satoshi Hasashi, escaping into the Netherrealm. Enraged, Scorpion ordered his clan to hunt down the sorcerer and retrieve his son.

She appears in the illusion made by Quan Chi, in which Bi-Han is framed for her murder in Mortal Kombat (2011). In the illusion, Harumi is hiding in their home, with an infant Satoshi, while the Shirai Ryu massacre is occurring. However, "Sub-Zero" finds them in their home and pulls out a sword. As he prepares to kill them, a crying Harumi attempts to comfort and protect her child from their fate. As "Sub-Zero" cuts both of them down, Harumi lets out a bloody scream. Upon seeing the illusion, Scorpion becomes enraged and kills the elder Sub-Zero, who he previously promised to spare for Raiden in exchange for his clan to be resurrected.

Harumi referred to by Hanzo by her 'pet' name Kana appears in the Mortal Kombat X comic series when Hanzo is poisoned by the demon-possessed Fox. In his delirium, Hanzo fights through the Lin Kuei with ease during the Shirai Ryu massacre before finding the frozen body of Kana holding their infant son, Jubei. Seeing his families corpses, Hanzo falls to his knees in grief and mourns over their deaths. However, Hanzo soon realizes what he is witnessing isn't real when confronting the Elder Sub-Zero, awakening from his delirium.

Kana appears in Mortal Kombat: Legacy Season 1, where she is portrayed by Maurissa Tancharoen.[1] Prior to the tournament, she and Hanzo have a son, named Jubei, who is instead a child and dreams to become a Shirai Ryu ninja like his father. Although she and her family live contently in the Shirai Ryu village, she expresses her concern for Hanzo's occupation and refuses to have her son follow in his footsteps. After two Lin Kuei ninjas trick Hanzo into leaving the house, an assassin enters the house and kills Kana.

In Season 2, Kana returns in a flashback that takes place years before the Shirai Ryu massacre. When she, Hanzo, and a younger Jubei are walking down a path between the Shirai Ryu and Lin Kuei territory, Kuai Liang, Bi-Han's younger brother who's against the possibility of peace between the two clans, holds Jubei hostage with his friends. When Hanzo reminds him that this goes against his brother's wishes, Kuai Liang let's go of Jubei, who runs back to Kana. However, Kuai Liang and his friends then attack Hanzo, who is forced to seemingly kill them while Kana prevents her son from seeing the bloodshed.

Harumi was killed along with other Shirai Ryu members by Lin Kuei assassin led by Quan Chi in the guise of Sub-Zero.

4 centuries ago, Bi-Han led a group of Lin Kuei assassins to Japan in order to kill Hanzo Hasashi and the clan of Shirai Ryu. Bi-Han's group arrived when Hanzo was away from his house. Harumi hid her daughter in the floor before she and her son, Satoshi, were killed with an icicle that froze their bodies by Bi-Han.

Scorpion's wife holding their son as their village is raided as seen in Scorpion's MK 2011 Story Mode. 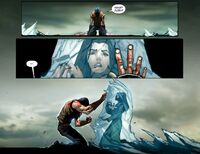 Retrieved from "https://mortalkombat.fandom.com/wiki/Harumi_Hasashi?oldid=368544"
Community content is available under CC-BY-SA unless otherwise noted.