Hapkido is used by Scorpion as his primary fighting style in Mortal Kombat: Deadly Alliance, Deception, Unchained and Armageddon.

The character Monster also used this fighting style in Deception's Konquest Mode, due to being a reskin of Scorpion. 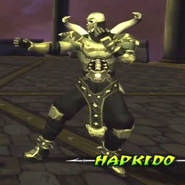