The Gurkha Knife, or Kukri, is a heavy, curved Nepalese knife used as both a tool and a weapon. It is also a part of the regimental weaponry and heraldry of Gurkha fighters. Known as Khukkuri in its original Nepalese, the word has several spellings in English, the most common of them being Kukri.

The Kukri design is centuries old with the blades typically between 12 to 15 inches long. There are however smaller knives with 6 to 8 inch blades and ceremonial versions ranging from 24 to 28 inches. Kukri sheaths normally hold 2 traditional small knives called the karda and chakmak. The chakmak is for sharpening the blade and starting fires with flint and the karda is for skinning. All Kukri have a notch at the base of the blade near the handle it is called the cho or kaudi. The sheath or scabbard is usually made of wood with a leather covering and a brass cap at the end. These knives are mostly made in Nepal or India and a majority of them are hand crafted.

In MK11, Kukris are also a part of the Kollector's arsenal. Going alongside his sickle, chained mace, mystic beacon, bolas, chakram and etc. 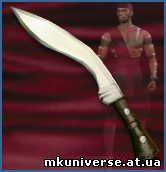 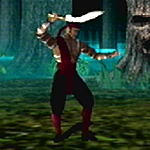 The Kollector's Kukri knives alongside his other weapons and props. 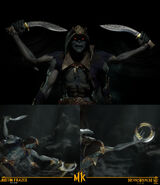 Add a photo to this gallery
Retrieved from "https://mortalkombat.fandom.com/wiki/Gurkha_Knife?oldid=353105"
Community content is available under CC-BY-SA unless otherwise noted.