Paolo Montalban (MK: Conquest)
The Great Kung Lao is a character occasionally referenced in the game series and featured in the television show Mortal Kombat: Conquest. He is the ancestor of the present-day Kung Lao, Kung Jin and Liu Kang.

Kung Lao's ending in Mortal Kombat (2011) states that he is the reincarnation of the Great Kung Lao. He learns this after touching his "ancestor's" tombstone and being filled with his memories. He was reincarnated so that he could avenge his failings. As this has never been brought up in the main storyline it's unknown whether or not it's canon.

In the comics, he appears as a person in his 30s. He wears a maroon red bandana and spiked wristbands. He also wears traditional Kung Fu red pants along with tabi shoes and a yellow sash.

In Mortal Kombat: Conquest, the Great Kung Lao is portrayed by Paolo Montalban. While Conquest was not part of the canon storyline the Mortal Kombat games follow, it nevertheless was immensely popular among the fan community, as he was mentioned in the first movie.

Kung Lao was raised in the Order of Light, a monastery of Shaolin Monks. While he lived happily with his family and friends, Kung Lao prepared for his entire life to fight in Mortal Kombat. He was trained thoroughly under the monastery's phenomenal martial artists, teaching him moves many would think impossible. All of Kung Lao's training made him undeniably the monastery's best fighter.

After leaving the monastery, Kung Lao established himself in the trading post of Zhu Zin, that was owned by the Reylands. Living with him were two other strong fighters, Jen's former bodyguard Siro, and the former thief Taja. Kung Lao made his living by fighting against the Outworld murderers and all those who threatened those he cared about. But every day, he also lived with two big regrets: the untimely death of his beloved Jen, and the mercy he showed to the miserable sorcerer Shang Tsung. 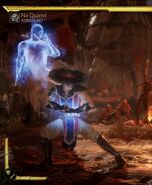 Great Kung Lao as he appears in the end of Mortal Kombat 11: Aftermath
Add a photo to this gallery
Retrieved from "https://mortalkombat.fandom.com/wiki/Great_Kung_Lao?oldid=347581"
Community content is available under CC-BY-SA unless otherwise noted.
FandomShop Newsletter Join Fan Lab