Goro celebrated nine consecutive victorys in Mortal Kombat and brought more honor to the Shokan race with each victory. He entered the Mortal Kombat tournament to fight for Outworld and to help the emperor, Shao Kahn, achieve his goal: to conquer Earthrealm.

Goro appeared in his lair where he confronted the last remaining Earthrealm warrior, Liu Kang. Although Goro was considered a mighty warrior and had experience on his side, he was defeated by Liu Kang, who later defeated the sorcerer Shang Tsung, winning the Mortal Kombat tournament and assuring freedom for Earthrealm.

Goro is later seen along with Sheeva at the beginning of the second tournament in Shao Kahn's throne room. He offers Shao Kahn a Ying Yang seal. Kahn inspects the seal, then hands it back to Goro. The significance of the Yin Yang seal (if any) is never explained.

Later on Goro found Liu Kang in the Tower searching for Kitana, Goro tried to challenge Liu Kang, but ended up fighting Kung Lao instead. The Shaolin Monk was victorious, avenging the death of his ancestor, the Great Kung Lao. After defeating Goro, Kung Lao demanded the location of Kitana, Goro told them that she was to be found in the Coliseum, but he had no doubt she was going to be executed. Enraged by Goro's words, Liu Kang knocked him unconscious.

Goro later appeared guarding Earthrealm prisoners alongside Kintaro and Kano, and was frozen by Cyber Sub-Zero. Both Goro and Kintaro broke free of the ice and faced the former Lin-Kuei in a two-on-one match, but the two Shokan ended up losing to the cyborg.

Goro is first featured in flashbacks narrated by Kotal Kahn, which reveal Goro aided Shao Kahn in slaughtering the people of Osh-Tekk.

In the present, Goro was sent by Outworld's new emperor to hunt down the traitors to the empire, Reiko and Mileena. However, though Goro succeeds in locating them in the Golden Desert, he is successfully swayed to their side by promises of restoring the Shokan to their former glory and vows to kill Kotal Kahn for them.

In chapter seven, Goro discusses with Reiko over their strategy to lure Kotal Kahn to them, as well as their ambush of his father, Kotal K'etz. While Rain blocks out the sun using storm clouds to weaken the Osh-Tekk and Red Dragon mercenaries Reiko hired lay in wait using cloaking technology, Goro stands boldly outside Mileena and Reiko's fortress in the Golden Desert as K'etz approaches with a band of warriors, Reiko having lured them there by leaking their location for their trap. Kotal K'etz declares Goro a traitor and strikes him with Shao Kahn's own Wrath Hammer, shattering several teeth in his jaw, though Goro is hardly fazed.

Challenging K'etz to do his best, Goro uses a fireball and dropkick to catch the former ruler of Osh-Tekk off-guard while Mavado of the Red Dragon springs the trap on K'etz forces. Smashing K'etz skull against a rock, all the while declaring he is no ratcatcher for his son, before claiming the Wrath Hammer for himself and using it to decapitate K'etz, killing him.

In chapter eight, Goro rallies the Red Dragon mercenaries, with Rain at his side, as he informs them that Mavado has reported Kotal Kahn's approach, the usurper emperor riding alone to face them. Goro then declares the Kotal Kahn will die as his father did, at his hands.

Later, Goro watches as Kotal approaches, alone, with Rain calling the Osh-Tekk mad, which Goro states was their plan all along, to make Kotal reckless and easy to kill. Goro orders Rain to block the sun to render Kotal powerless, but while Rain complies and summons more clouds, Kotal Kahn badly burns the traitor with the sun anyway, revealing his enhanced power through blood magic. Unconcerned for his ally's condition, Goro calls the first wave of Red Dragon forces to meet Kotal head on, but they are all slaughtered in short order and the emperor challenges Goro to kombat.

Goro eagerly accepts, commanding the remainder of his forces to stay behind. Goro declares that Shao Kahn would never have allowed an Osh-Tekk on the throne and that he knew better to treat a Shokan as a servant and attacks Kotal with a fireball, proclaiming that the Shokan live to conquer. A wounded Kotal Kahn attempts to rise, but Goro kicks him back onto the ground, before lifting Kotal up his neck. The Shokan Prince mocks Kotal, telling him to struggle and die with dignity like his father did.

However this proves to be Goro's fatal mistake, as the enraged son takes vengeance for his father and escapes Goro's grasp, taking Goro's arm with him. A shocked and agonized Goro can do nothing as Kotal takes each of his arms off with a single swing of his sword. Falling to his knees, Goro begs Kotal Kahn to finish him as his forces are slaughtered by Kotal's own, having been hidden by Reptile.

Kotal considers it before declining, declaring it to be an act of kindness that is forbidden by Shokan tradition, further infuriating the humiliated prince. Later, though unseen, Reptile reveals Goro will be returned to the city of Kuatan to be imprisoned.

In chapter thirteen, Goro is seen kneeling in shame before his father, King Gorbak. Instead of executing him for his failure however, Gorbak sheds a tear for his son's shame and bids him to rise. Goro asks his father to kill him, the prince declaring himself an unworthy heir, but Gorbak refuses and proclaims that the Shokan will no longer suffer under Osh-Tekk rule before revealing to his son he has sent an army led by Kintaro to strike at Kotal Kahn while he is weak.

Goro is confirmed to return in MKX, though his role is still unknown at the moment.

Goro and Kintaro order the soldiers to stand up

Slaughtering the Osh-Tek with Shao Kahn 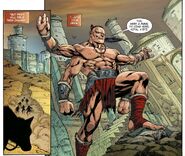 Struck by the Wrath Hammer 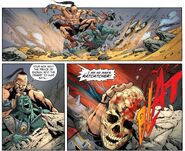 Goro before his father, Gorbak

Son's pain, Father's vengeance
Add a photo to this gallery
Retrieved from "https://mortalkombat.fandom.com/wiki/Goro/Current_Timeline?oldid=238219"
Community content is available under CC-BY-SA unless otherwise noted.