Not to be confused with Powered Gauntlets.

Gauntlets are weapons used by Darrius in Mortal Kombat: Deception and Mortal Kombat: Armageddon. They appear to be bracers/forearm guards that have large elaborate blades attached to the wrists. They are his weapon of choice as a part of the Seidan Resistance and uses them to battle the Seidan Guard.

They reappear in Mortal Kombat 11 in the game's Krypt as Kollector trade items. They would also later reappear in Darrius's cameo alongside Hotaru. 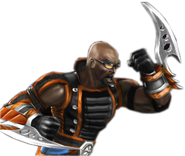 Darrius with his Gauntlets in his "MK:A" versus render. 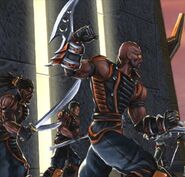 Darrius brandishing his Gauntlets as he fights alongside his Seidan Resistance. 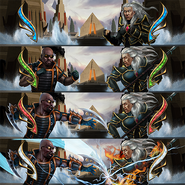 Darrius' gauntlets making a cameo appearance alongside him in Mortal Kombat 11.