Friendships allowed players to perform various (and highly unlikely) acts of kindness and goodwill towards their helpless opponent instead of killing them after winning the match. This included giving a birthday present, blowing bubbles, painting a picture, ice skating, cooking food and doing a funny dance. To perform a Friendship, when the opponent is defeated, the player must perform a special button combination for their character and have won that round using only High or Low Kick. In Mortal Kombat 3 and its updates, Ultimate Mortal Kombat 3 and Mortal Kombat Trilogy, the player had to win the round without using the Block button.

They make a quasi-cameo in Mortal Kombat: Deception's Puzzle Kombat, where the characters sometimes hand their foe an exploding gift. This partially mimics Baraka's Friendship in the regular Mortal Kombat games, with the exception that the "gifts" are offered during the fight, instead of after the fight is decided, and they explode. Nightwolf also does his Nintendo 64 Mortal Kombat Trilogy Friendship as he juggles his tomahawks.

Friendship is referenced in Mortal Kombat X in the form of a social networking site (a parody of Facebook), it only makes an appearance in Cassie's second fatality where she uploads a selfie of her jawless victim on the website with comments about it from different characters.

In a Mortal Kombat 11 pre-fight interaction, Kung Lao requests Johnny Cage to stop trying to get his hat, with Johnny asking if rabbits are inside of it or not; Kung Lao responds that "only [his] friends know for sure", referencing his Friendship from Mortal Kombat II. The Joker's first fatality has him handing over a large cake to his opponent, and the words FRIENDSHIP appear as balloons on a sign in the background before the cake explodes and he shoots them to pieces. The popped balloons then reveal the word FATALITY. 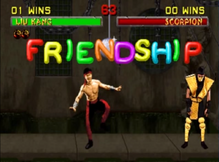 Kitana bakes a cake in MK2. 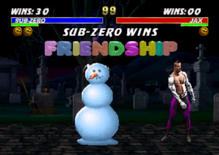 Sub-Zero transforms into a snowman in MK3. 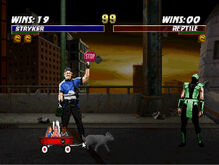