In Free-Fall, a fighter is knocked off the ledge in an arena. While falling, they will be pummeled by a barrage of attacks from their opponent. Shortly later, the victim's body will land on the ground while the opponent will land unharmed. As a result, the victim will lose a portion of health. Certain moves can be applied in a rapid succession in order to inflict a large amount of damage: punches are quicker than kicks. Fatalities can't be performed during Free-Fall.

As the two fighters fall, the instigator is able to attack their opponent, with each attack increasing the damage the opponent takes when they land. However, it is possible for the opponent to parry the attacks, reversing the two characters' positions. If enough attacks are landed, the attacker can utilize a Free-Fall Super Move, an unblockable attack that causes significant damage to their opponent and instantly knocks them to the ground. 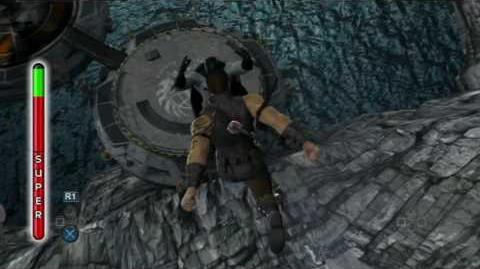 Mortal Kombat vs DC Universe - Freefall Moves
Add a photo to this gallery
Retrieved from "https://mortalkombat.fandom.com/wiki/Free-Fall?oldid=348624"
Community content is available under CC-BY-SA unless otherwise noted.