Fox is a young member of the Shirai Ryu clan and former friend to Takeda. Not much is known of his origin, but he is one of the members hand picked for the clan. He is the assigned sparring partner and protector of Takeda Takahashi as appointed by their master. However, he quickly loses his mind due to a demon's influence and massacres his own clan.

Fox is a teenager that appears to be of African descent, with short black hair and brown eyes. He wears tan and brown clothing, apart from the typical yellow of the Shirai Ryu. Post-possession, he has a skinned face and ominous red markings on his chest and shoulders.

Some point after the Netherrealm War, Hanzo Hasashi recruited Fox into the Shirai Ryu clan after noting he had survived a tragic event and lived at the clan's temple in the Himalayas. Soon after, he became the sparring partner of Takeda and easily defeats him with little effort before Scorpion declares him the winner. Fox tells Takeda not to worry and that everyone loses their first fight while promising to help him set his broken nose 'after round two'.

Over the years, Fox becomes close friends and rival with Takeda. Eventually, a more skilled teenage Takeda holds his own against Fox, boasting superior speed and even breaking Fox's nose with a headbutt when Fox gets him in a choke hold when they were sparring in the winter. Although Hanzo declares him the winner, Fox congratulates Takeda for getting him back after so long and defends him when their sensei scolds Takeda. When Hanzo declares Fox as Takeda's protector, Fox becomes confused when a strange voice begins speaking to him inside his head, though he quickly dismisses it. Scorpion then reveals to Fox and Takeda he received an unwelcome visit from Raiden that very day and was warned of a "demon" who is targeting Earthrealm's protectors.

Later that night, Fox is further tormented by the voice before it finally possesses him and forces him to steal the Kamidogu dagger and mutilate himself with it. Takeda is roused awake by the possessed Fox, who has carved off his own face, and Fox reveals he has slaughtered the Shirai Ryu in their sleep, along with his intentions to finish Scorpion and Takeda next. Fox leads Takeda to where he has Hanzo bound and hanging upside down by his own spear and chain, explaining that he's poisoned Scorpion with one of his own mixtures, forcing him to relive his worst moments. Fox tells Takeda of Scorpion's past struggles with controlling the vengeful spirit inside him and hands Takeda a sword, bidding the younger fighter to spare Scorpion from what he'll become from enduring another loss and join him.

Takeda refuses to kill his master and the possessed Fox mocks him, calling him a runner and not a fighter. When he turns his back on Takeda, the latter grabs a nearby whip and strikes Fox, getting in a kick as well before Fox unleashes a beam of red power that sends Takeda flying back. When Hanzo awakens from his delirium as Scorpion and escapes his bonds, he tells the possessed Fox that his clan is his family and Fox will pay for his actions. Unamused, Fox taunts Scorpion before his sensei snatches him by his neck and unleashes a breath of hell-fire upon him while also stabbing the Kamidogu dagger in Fox's heart.

Though badly burned, Fox is hardly fazed and knocks Scorpion back with a beam of red light, thanking him and proclaims he grows stronger with every drop of blood that is spilled. The demonic force mocks Scorpion for trusting Raiden and starts to say something about the daggers having a connection to Quan Chi, but Fox's throat is pierced by a sword and his head is cleaved in half by Takeda, finally killing the possessed Shirai Ryu. Hanzo takes the dagger from Fox's corpse and silently comforts the shocked Takeda. Later, the two burn the dead Shirai Ryu, including Fox, and set off to avenge their fallen clan.

Unable to keep up

Voice in his mind 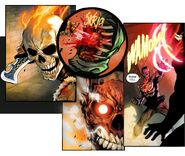 Killed by Takeda
Add a photo to this gallery
Retrieved from "https://mortalkombat.fandom.com/wiki/Forrest_Fox?oldid=338207"
Community content is available under CC-BY-SA unless otherwise noted.