In the Mortal Kombat series of fighting games, a Fatality is a special finishing move that can be used against one's opponent at the end of the final match. When the announcer says "Finish Him", or "Finish Her" if the opponent is female, the player can choose to kill him or her through a fatality move. If input correctly, the background will darken, followed by the desired result.

Unlike special moves, a Fatality may require certain distances and quick button sequences in order to achieve the desired result. For example, in Mortal Kombat 3, one of Sub-Zero's Fatalities requires that he stands close to the opponent and quickly execute Block, Block, Run, Block, Run. Every character has their own special Fatality that must be performed at a certain distance from the opponent. The number of Fatalities varies depending on the game; while characters in Mortal Kombat and Mortal Kombat: Deadly Alliance had only one, Mortal Kombat 3 and its updates featured as many as four.

In the movie, the word "Fatality" is actually said once by Shang Tsung.

While creating Mortal Kombat, Ed Boon and John Tobias started with the idea of Street Fighter II-like system and retained many of its conventions, but tweaked others. The most notable additions were graphic blood effects, more brutal fighting techniques, and especially the fatal finishing moves (this was a novelty as the traditional fighting games ended with the loser simply knocked unconscious and the victor posing for the players).

According to Boon, "it started with an idea to enable the player to hit a dizzied opponent at the end of the match with a "free hit", and that idea "quickly evolved into something nasty". According to Tobias: "Our first idea was to use them as a finishing move for the final boss, Shang Tsung, who was going to pull out his sword and behead his opponent. Then we thought, What if the player could do that to his opponent?" When we watched players react to the Fatalities, we knew we had no choice but to give them more."

Mortal Kombat: Deception and Armageddon feature a modification of the traditional Stage Fatalities, the "Death Traps". Death Traps do not need a special button combination as the opponent only needs to be either standing or hit in a particular spot on the stage. Unlike previous Stage Fatalities, Death Traps can be initiated anytime during a round and only require the opponent be hit into them, meaning an instant victory. However, if they are not executed in the decisive round, the fight does not end, going on to the next round. This action acts as a ring out.

The new kind of "Anti-Fatality" introduced in Deception is the Hara-Kiri. The Hara-Kiri (which is a type of Japanese ritual suicide, that literally means belly cut, is practiced when some person brings shame to his/her own family) is a move in which the defeated player kills him/herself upon defeat at the end of the last match, rather than be finished off by their opponent. This still results in a win for the character who was victorious in battle, it is just seen as an incredibly stylish way to go out. It is the first and so far only time in the Mortal Kombat series in which the defeated player is allowed to perform a finishing move. Each character has a different combination that can only be performed if the input corresponds to which character is defeated. The Hara-Kiri made its debut in Deception and seems to be a popular feature with the fans, although is not included in Mortal Kombat: Armageddon due to the limited Kreate-a-Fatality feature.

Although it has been available only in Deception, in some previous MK games showed homicidal-suicidal Fatalities. The first one being one of Kabal's finishing moves in Mortal Kombat Trilogy using a button combination for his Animality from Mortal Kombat 3 was a self-decapitation finisher which allowed various glitches if the extended fatality time is entered including the decapitated head turning into Kano. Another one was Cyrax's "Self-Destruct" from Mortal Kombat 3/Ultimate/Trilogy/Gold/Advance; Cyrax, a cyborg, enters a code on to his arm panel and moments later explodes along with his opponent in a manner reminiscent of the ending of the first Predator movie. Smoke, in MK3, went farther with his Fatality since he destroys the whole planet with his bombs, including himself and his opponent. In MKG, Cyrax borrowed this Fatality from Smoke together with his own while Smoke adopted Cyrax's self-destruct as his Hara-Kiri in Deception. Raiden, in Deception, also has a Fatality in which he sends electricity to his opponent, who explodes. The electricity then returns to Raiden, exploding him as well. In Mortal Kombat (2011), Cyber Sub-Zero has a fatality where he jumps onto an opponent, freezes himself with them, and both explode to ice bits (though the opponent only had the bottom half of his body intact).

For Mortal Kombat: Armageddon, the Fatality concept was completely revised. In all previous games, Fatalities and finishing moves were in the form of a button combo, activating a scripted animation sequence. In Armageddon, this system was replaced with a new Kreate-A-Fatality (KAF), or "custom chain-Fatality" system. After defeating an opponent in two rounds (with default settings), players are given a limited amount of time to perform one of several violent moves (such as ripping an organ out or snapping their neck) attributed to a button and direction combination. The time then resets and the player can perform a second move, but the timebar decreases more rapidly after each move. The longer a player is able to continue the chain, the higher ranking his Fatality receives; "Killer" Fatality, "Brutal" Fatality, "Evil" Fatality, etc. It is possible, with practice, to pull off a Fatality of up to ten moves or possibly higher. It is also possible to "fail" the Fatality by running out of time before performing a final finishing move (such as ripping the opponent's head off). If time runs out before the player can end the chain with a final fatal move, no rank or reward is given and the Fatality is not counted, regardless of how many moves were completed.

This new system required that other forms of finishing moves, such as Deception's popular Hara-Kiri self-Fatalities, be left out of Armageddon. This was met with a mixed reaction, some fans preferring the more interactive nature and freedom of the Kreate-a-Fatality system, and others missing the previous games' character-specific ending moves and alternatives to killing the opponent. Also, originally, there were individual character-specific Kreate-a-Fatality moves for each character, with other characters unable to access them, but this idea was dropped somewhere along the way, and in the final product all characters' pool of moves are identical, except for Shokans (Goro, Sheeva and Kintaro) and beast characters (Moloch, Blaze, Onaga and more) with the only exception being Motaro, since he has the normal characters´ moves.

The Fatality concept originated from various developers' wishes to further emphasize victory at the end of a match, so much as to rub it in the loser's face, although Steve Beran himself stated in a G4 interview that he wondered if it was possible to "rip a guy's heart out". Ed Boon and his fellow staff often come together to collaborate on ideas of different Fatalities often derived from movies, especially those from Japan.

The effect of dismemberment simply came from digitally editing body parts of the actors. The charred skeleton sprite came from a small skeleton figurine, animating it via stop-animation and adding fiery effects and resizing it to match the actors' size. In the History of Fatalities, the original figurine was stated to have been destroyed from constant bending, the only remnant existing being the arm, the main part used for MKII's burning animation. The bloody effects were digitally drawn on the actors when body parts were edited off. Kung Lao's Hat Slice vivisection effect was done by capturing footage of the actor falling to one side, cutting the images in half and then mirroring it.

For the gruesome audio uses for finishers, the audio staff employs the use of food or substances and records the sounds. Celery or hard fruit like apples are utilized for crunching and snapping bones while stirring, dropping, blowing into, or pulling thick gelatin (often with a plunger) is use for tearing flesh, leaking or gurgling blood.

Fatality in the minigame Puzzle Kombat.

Fatality in the minigame Motor Kombat.

Kung Lao performing a Fatality on Johnny Cage in MK (2011).

Baraka performing a Fatality on Scorpion in Mortal Kombat 11.

Jax Briggs performing a Fatality on Reiko in the 2021 film. 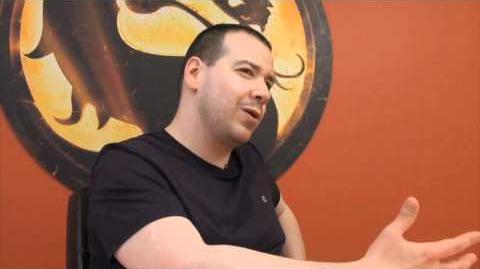 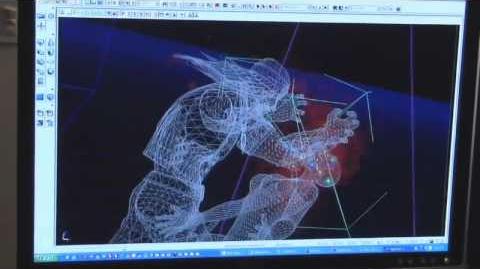 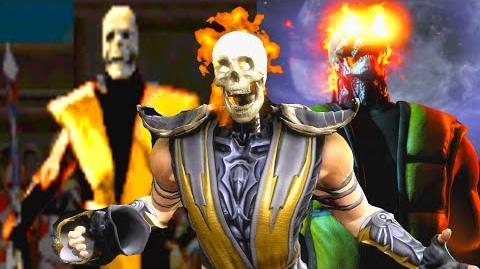 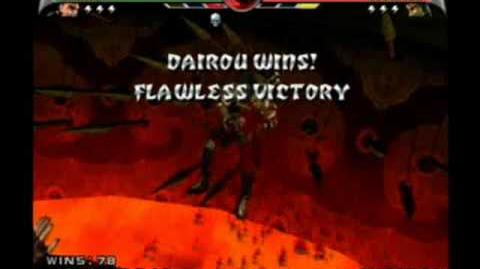 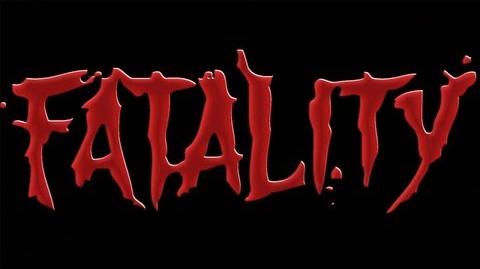