View source
watch 02:17
New Pokemon Games - The Loop
Do you like this video?
Play Sound

The Face of Kun-Lo is a strange ancient facemask used and worn by the Oni named Drahmin. Not much is known about it or where it originated from. It first appeared along with him in Mortal Kombat: Deadly Alliance.

About the Face of Kun-Lo

This strange, demonic mask allows Drahmin to focus his power from an unfocused, brutal fighting style into a precise, but still lethal one, earning him the title of the legendary Oni-Tormentor.

It is one of the collectible Relics under the name "Drahmin's Mask" found in the Konquest mode of Mortal Kombat: Armageddon.

It should also be noted, that this may be the reason why Drahmin has a much more humanoid appearance as compared to other Oni.

The mask appears in the Mortal Kombat 11's Krypt, one of Goro’s treasures on display in his lair. It also appears as a Kollector trade item as well as a Forge item. 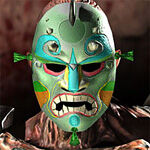 The mystery and legend of the Face of Kun-Lo.

Drahmin's Mask in the Krypt.

The Face of Kun-Lo as a Krypt Forge Material

The mask as a Kollector Item, named "Oni War Mask".

Drahmin's Mask as an Equipment Card in Mortal Kombat Mobile.