Start a Wiki
The Energy Bracelets are weapons used by Sonya Blade in every game she has appeared in. They allow her to shoot out pink ring-like projectiles from her hands that damage her opponent on contact, as well as empower her punching attacks.

In Mortal Kombat 11, Sonya's Energy Bracelets are a customizable Gear Item with many of them to choose from, ranging from actual bracelets to gloves of the normal and finger-less variety.

During Sonya's Chapter in the Story Mode, her past self must fight without her bracelets in the Black Dragon Fight Club as they were confiscated by the Black Dragon after both past & present Kanos captured her and the past version of Johnny Cage at the Special Forces Desert Command. During this time of the Chapter, all combos and special attacks involving her bracelets do not function. Additionally, her Fatal Blow is disabled, however she can still perform the initial strike of the attack, but the cinematic will never commence. 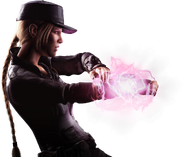 Takeda taking a blast from Sonya's Energy Bracelet and a Nut Punch from Johnny.
Add a photo to this gallery

Add a photo to this gallery
Retrieved from "https://mortalkombat.fandom.com/wiki/Energy_Bracelets?oldid=353640"
Community content is available under CC-BY-SA unless otherwise noted.