Elbow Blades are hidden blades seethed in Kano's gauntlets that he uses in Mortal Kombat X. He utilizes these blades in every variation with the exception of the Cutthroat variation, however he will always use them to initiate his X-Ray. The elbow blades later appear in Mortal Kombat Mobile as a unique Equipment Card called Scoundrel's Elbow Blades. 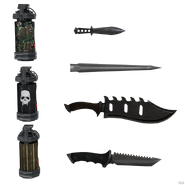 Kano engaging his Elbow Blade in his MKX Intro Animation

Kano using his Elbow Blade for a counter takedown strike

Tier X
Add a photo to this gallery
Retrieved from "https://mortalkombat.fandom.com/wiki/Elbow_Blades?oldid=353816"
Community content is available under CC-BY-SA unless otherwise noted.