This ancient royal helmet with two long horns (the Dragon King's Helmet or sometimes known as the Crown of the Dragon King or Crown of Onaga) is the most prized possession of Onaga the Dragon King, the legendary emperor of Outworld. The helmet was shown unworn and fallen after the player defeated Onaga in the arcade mode of Mortal Kombat: Deception, where it made its debut appearance. It was also featured as one of the collectible Relics under the name "Onaga's Helmet" in the Konquest mode of Mortal Kombat: Armageddon. It can be found in one of the fire booby trap rooms in the Lin Kuei Temple.

Long before Shao Kahn's rule in Outworld, this helmet forever served as Onaga's crown as the Dragon King was the true and rightful ruler of Outworld that was once a majestic empire and and unified realm. After being ousted, it now serves as a helmet used in battle.

Some say this helmet helps protect the Dragon King's only known weak spot. 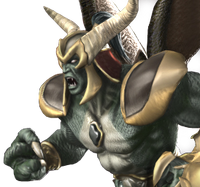 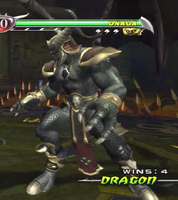 Onaga in action while he is seen wearing his Helmet.