Not much is known about the Dragons of Mortal Kombat. They are seldom mentioned, and there are only three possible known members of the race.

There appears to be different races of dragons. The only two known are the ones Onaga, Orin and Caro belong to.

Onaga was proclaimed the Dragon King, although it is unknown whether he was given this title by his elusive brethren or whether it is self-proclaimed, though it may have been a description, meaning he was a king who was also a dragon, not the king of dragons.

Onaga possess some similar physical characteristics to his possible brethren, such as having scales. Similarly to Orin and Caro, Onaga can breath fire. Onaga is able to raise the dead with a power given to him by his heart, and has made his army allegedly undefeatable, because he continuously revives them when they are slain.

This army was later uncovered by Quan Chi, and was used as the ultimate weapon for the Deadly Alliance.

Although it is unknown where they originate from, the most likely place is Outworld. While in that realm, they were even a powerful and forgotten group of creatures belonged to that same species called the Great Dragons, which was the origin of the Great Dragon Egg. As there is little other trace of any other Dragons in the Mortal Kombat universe, it is possible that most of them were wiped out, similar to Cryomancers or the Saurians. However, the Shokan people are known to be a race of half-dragons.

In Mortal Kombat: Armageddon, there are two dragons named Orin and Caro, who resemble East Asian Dragons, with the ability to breathe fire and open portals to other realms. These dragons guard and aid the game's protagonist and antagonist, Taven and Daegon. Other than than the ability to breath fire, there is very little similarities to these dragons and Onaga, and it is unknown how these two species of dragon are related.

In Mortal Kombat (2011), dragons are seen as a part of Shao Kahn's invasion force during the attack on Earthrealm.

Additionally, the Elder Gods are said to appear as dragons in their true forms. The dragons resemble those seen on the Mortal Kombat dragon symbol, and that is likely why the symbol is so prevalent throughout the series. Images of the Elder Gods as dragons can be seen in Onaga's unused Deception ending, the archway of a temple in Armageddon's Konquest mode, Captain Marvel's Mortal Kombat vs. DC Universe ending, and the climax of Mortal Kombat (2011)'s Story Mode.

Liu Kang is also able to transform into a dragon, as well as create or summon tiny dragons in the palm of his hand. How these abilities relate to the elusive dragons of the MK universe is unknown.

In Mortal Kombat X, Sub-Zero's arcade ending has the Lin Kuei Grandmaster trekking to Outworld and stealing a female Frost Dragon's eggs, in order to train the young, known as Dragonlings, to be kombat mounts. These mounts would bring the Lin Kuei into legend, making sure no one dared to invade Earthrealm. This ending seems to show that dragons are elusive, wild predators native to Outworld that can control various elements, depending on the species. How the dragons Orin, Caro, and Onaga are related to these wild dragons is not made clear. [1] 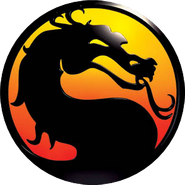 The Dragons are source of the Mortal Kombat icon. 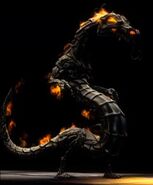 Concept art of a sea dragon's statue in Lung Hai's temple found in Mortal Kombat: Deadly Alliance's Krypt. According to the artwork's description, the dragon would swim into the temple's inlet to feed on sacrifices.