The Deathstone was an artifact used by Shao Kahn. It held the power to reanimate dead warriors, more precisely an entire legion of them, and bring them under the command of whoever held it.

It is stated at one point by Goro that the Deathstone that appears is actually a fragment of what it once was. It appears as a small blue-black rounded stone on the end of a chain, and sometimes set at the end of a rod. It is said that the Deathstone is very cold to the touch, and can cause normal mortals to freeze up and loose control of their body as they feel the power of the dead coursing through them. This happened to Kano, who planned to steal it for personal profit, before Scorpion took it back and scolded the would-be thief.

Later, Scorpion seemingly abandons his grand plans with the stone and destroys it in order to grant the release of death to Siang. Why he did this is uncertain and unexplored by the comic's end. 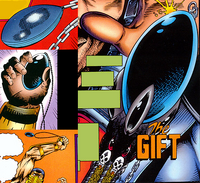 Kano reeling from touching the Deathstone. 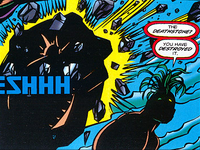 Scorpion destroys the Deathstone before Siang.
Community content is available under CC-BY-SA unless otherwise noted.
Advertisement