Datusha, the Bane of the Moroi is the name of an ancient weapon currently wielded by the demon Ashrah, who knows it only as her Kriss.

The weapon is, in fact, a powerful vampire slaying tool that manipulates its owners into slaying vampires purely for the bloodlust of the sword itself, while having the user think they are fighting for a higher purpose. It was once in the hands of a vampire known as Kahil Grigesh. To atone for his actions against his own kind, he ventured into the Netherrealm and committed hara-kiri, ending his own life and trapping the sword.

It is there, however, that Ashrah discovered the sword and used it to slay many Oni until eventually escaping the realm.

Ashrah's ending in Mortal Kombat: Deception shows her losing it and is possibly retrieved for her by Shujinko in Deception's Konquest mode.

Ashrah uses the Datusha as her weapon again in Mortal Kombat: Armageddon.

From there, the sword began compelling her to slay an unending amount of vampires, which brought her into conflict with Nitara. 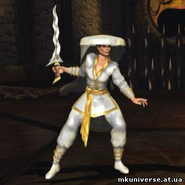 Ashrah battles Noob with Datusha in hand during her MK: Deception ending.

Darusha being left behind after Ashrah was able to defeat Noob and earn ascension from the Netherealm.

Datusha, Bane of the Moroi. As a Equipment Card in the Mortal Kombat Mobile.