Darrius' Shades are a pair of intricate and stylish sunglasses that belong to the revolutionary leader of the Seidan Resistance, Darrius. They first appeared along with Darrius in Mortal Kombat: Deception and later reappeared and was featured as another collectible Relic within the Konquest mode of Mortal Kombat: Armageddon.

Originally designed by Darrius in the Realm of Order and possibly nearly as old as he is, Darrius wears these sunglasses to signify his defiance against Seido's laws of conformity as well as his own disgust and hatred towards his mortal enemy, the Seidan Guard.

Darrius the leader of the Seidan Resistance, always wears his trademark shades. 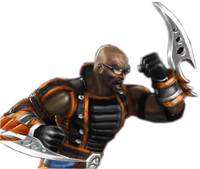 Darrius seen with his shades in MK:A.