Probably best known as the "Toasty!" voice (MKII, MK3, UMK3, MKT, MK4, Mortal Kombat: Shaolin Monks, MK 2011), his photo would sometimes appear at the bottom as he exclaimed "Toasty!" when an uppercut was performed. Forden would also be heard when Scorpion performed his well-known "Toasty" fatality.

Forden's first Mortal Kombat noteworthy appearance was as an easter egg in Mortal Kombat II, where Forden's head would appear after a chain of combos in the bottom-right corner of the screen and shout "Toasty!" in a falsetto when an uppercut was performed. Before this, he made a small cameo appearance in the original game as one of the corpses found under The Pit stage, which can also be seen in the secret Game Over screen.

In Mortal Kombat 3, freezing an opponent in "danger mode" with Sub-Zero would make Forden appear and shout "Frosty!". Additionally, in Ultimate Mortal Kombat 3, Dan Forden would appear after a Stage Fatality in Scorpion's Lair saying "Crispy!" if the "High Punch" button is held down in both controllers after executing the Fatality input. If, instead, the "Run" buttons are held down, then Shao Kahn would say "Crispy!"

Forden also appears in Mortal Kombat (2011) with his "Toasty!" exclamation, although his appearances are more rare this time around. As a form of tongue-in-cheek humor, Forden is seen wearing a shirt with buttered toast on it.

Dan appears as one of Cassie's social media friends in her "Selfie" Fatality, with his MK3 Toasty pose as his profile. 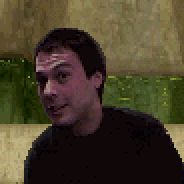 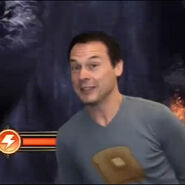 Dan Forden (Holding the mic) as he appears in the official MKII comic.
Add a photo to this gallery

Retrieved from "https://mortalkombat.fandom.com/wiki/Dan_Forden?oldid=306045"
Community content is available under CC-BY-SA unless otherwise noted.