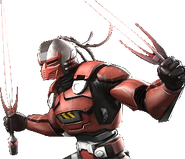 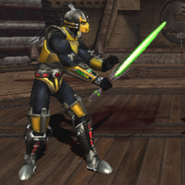 Cyrax fires his Energy Net towards Sektor in MK 2011.

Sektor firing a missile at Sub-Zero in MK 2011.

Cyber Sub-Zero holding one of his Ice Bombs.

Triborg combining the abilities and weapons of Sektor, Cyrax and Smoke for a fatality

Kano's Cybernetic Heart
Add a photo to this gallery
Retrieved from "https://mortalkombat.fandom.com/wiki/Cybernetic_Weapons?oldid=332728"
Community content is available under CC-BY-SA unless otherwise noted.