The Cybernetic Heart Unit is the artificial heart of the Red Dragon clan's loyal operative Hsu Hao. It first appeared along with him in Mortal Kombat: Deadly Alliance.

Many years ago, Hsu Hao had been part of a covert division of the Chinese Military that experimented with cybernetic implants to enhance physical performance and endurance. The same surgeon that operated on Hsu Hao later worked on Kano's eye implant.

In Mortal Kombat X, Kano's heart implant has a similar appearance to Hsu Hao's, although it is unclear if the heart is physically implanted within Kano's chest or merely being worn over his chest, due to him visually removing the unit's power core. 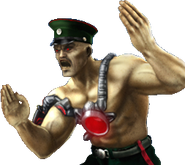 Retrieved from "https://mortalkombat.fandom.com/wiki/Cybernetic_Heart_Unit?oldid=361860"
Community content is available under CC-BY-SA unless otherwise noted.