Lab
The Cyber Lin Kuei Assembly is an arena that debuted in Mortal Kombat 11.

The stage is presented as a combination of sorts of a robotic assembly plant, and surgical operating room. The farthest right-hand section shows skinned bodies being carried aloft in large tubes, while a large operating room glass wall with the Lin Kuei symbol upon blocks anyone from seeing the full grisly surgeries performed on many helpless victims, sprays of blood issuing followed by a robotic hand tearing the brain and spinal column from the corpse.

The main feature of the arena shows various Cyber Lin Kuei being built in the background, the bodies carried on large rotating gyros as the cyborgs go over a final assembly before the surgically removed brains are implanted in the cranial units. The story mode reveals the factory was restored by Kronika, and that the time-displaced Sektor is using kidnapped members of Sub-Zero's own Lin Kuei clan as unwilling donors for his growing army of cyborg ninjas. 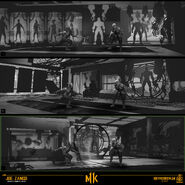