The Cyber Initiative is the name of a program instigated by the Lin Kuei clan of assassins with the intention of transforming their warriors into Cyborgs. It was campaigned by the Lin Kuei Grandmaster, who made an aggressive plan on turning many of the clan warriors; either willingly or unwillingly, into bionic killing machines slaved to their clan's hive mind. Those that supported the Initiative felt it would remove insubordination from their ranks, whilst those that opposed it believed that they would have to surrender their instincts & free will.

The Grandmaster proceeded with his plans of transforming his warriors into cyborgs. Among those chosen were both Cyrax and Sektor; the former of whom had great reservations on this plan as he felt that it turned them into cold, soulless machines instead of true warriors.

Between the events of MKII and MK3, Smoke and the second Sub-Zero (Kuai Liang) opposed this initiative and fled the clan. They were pursued, Sub-Zero escaped but Smoke was captured and turned into a cyborg. The three cyborgs (Sektor, Cyrax and Smoke) were sent to eliminate Sub-Zero, but the ice warrior helped Smoke to discover his intact soul inside his mechanical body, and the fact that he is one of Raiden's chosen warriors, so he joined Sub-Zero to fight Cyrax and Sektor, being successful. After that, however, Smoke was captured by Shao Kahn's forces, and was locked away in the bowels of Shao Kahn's Fortress in Outworld.

Sektor fled, but Cyrax was reprogrammed by Sub-Zero to destroy Shao Kahn. However, the emperor of Outworld was defeated before Cyrax could complete this task. He awaited for new orders but they never came, so he malfunctioned and wandered until becoming mired in the middle of Jade's Desert. Cyrax was recovered and repaired by the Lin Kuei. However, he appeared somehow different than when first constructed. Once again the clan sent Cyrax into battle, with his fellow cyborg Sektor assigned to monitor him.

After the defeat of the fallen Elder God, Shinnok, it became apparent that Cyrax had begun to experience flashbacks of his former life. Special Forces agents Sonya Blade and Jax Briggs brought him to the Outerworld Investigation Agency (OIA) headquarters, and used its technology to restore his humanity. Grateful for their help, Cyrax joined the OIA as a scout in the realm of Outworld.

Many events would leave him as the only active cyborg remaining of the three created, but during his many violent battles against Outworld forces, Sektor's program became corrupted. He believed the Lin Kuei Grandmaster to be inferior, and set his new objective to eliminate him and took control of the clan. Sektor successfully slew the Grandmaster, but was stopped from claiming the Dragon Medallion, the proof of the clan's leadership, by a returning Sub-Zero. Sub-Zero defeated Sektor in battle and claimed the title of Grandmaster. After his defeat, Sektor fled to Japan and formed the Tekunin, his own clan of cybernetic warriors.

With the death of the Grandmaster of the Lin Kuei and Sub-Zero assuming the leadership of the reformed Lin Kuei, the Cyber Initiative came to an end.

Following the death of the first Sub-Zero (Bi-Han) at the hands of Scorpion in the Mortal Kombat tournament on Shang Tsung's Island, Raiden confronted Cyrax over the matter of the Cyber Initiative. The Lin Kuei warrior confessed to be one of those that spoke out against the Grandmaster's cybernetic plans, but ultimately decided that he served the leader of the Lin Kuei, regardless of the decision. However, after being betrayed by Shang Tsung, he openly opposed the Cyber Initiative and defeated Sektor, where he told his comrade to inform the Grandmaster that he was leaving.

Despite this being the case, both Sektor and Cyrax were converted into Cyborg units. Afterwards, they attempted to abduct Smoke to convert him as part of the Cyber Initiative, but failed due to the intervention of Raiden. However, the second Sub-Zero was attacked and successfully kidnapped, where he was transformed into a cyborg (Cyber Sub-Zero) until the Earthrealm warriors managed to successfully restore his personality during Shao Kahn's invasion of Earth.

After the death of Shao Kahn, Sektor would assume leadership of the Lin Kuei by killing Lin Kuei Grandmaster. He forced all members to be converted into cyborgs, killing anyone who refused to join his cause. With an enslaved Cyrax serving as his second-in-command, Sektor would set up a cloning program to create a vast army of cyborgs devoted to serving him, replacing the need for slaving protocols within the converted. After training with Bo' Rai Cho, Sub-Zero attacked Sektor's headquarters and installed a virus that removed the slaving protocols, freeing Cyrax from Sektor's control. Sub-Zero would then single-handedly kill Sektor and take his head. While the remaining cyborgs installed Cyrax as their new leader, Cyrax instead chose to activate his self-destruct to destroy himself and all other cyborgs, asking Sub-Zero to rebuild their clan.

While Sub-Zero succeeded in restoring the Lin Kuei, a mysterious single surviving cyborg, named Triborg, would seem to be the last of the Cyber Initiative.

The Cyber Initiative would reform in the new timeline created by Kronika. Initially, she revives Sektor and Cyrax in their original cyberized states, as well as heavily cyberizing Frost after she was alienated by her former master Sub-Zero, who she deemed unfit to lead the Lin Kuei after Sub-Zero's allegiance with Scorpion, the grandmaster of their rival clan. Cyrax would eventually regain his free will with the help of Sub-Zero and Scorpion, and would commit suicide once more as part of a plan to briefly disable the Cyber Lin Kuei. Sektor, though briefly leading the Cyber Lin Kuei, was destroyed after being turned into a living bomb by Kano, leaving Frost to assume leadership of the Cyber Lin Kuei under Kronika's command. 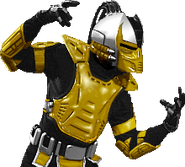 The latest version of Cyrax, as seen in MK 2011 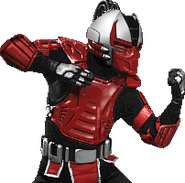 Sektor with his Energy Swords 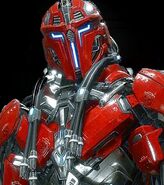 The latest version of Sektor, as seen in MK 11 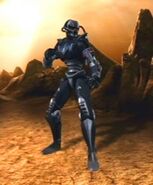 Smoke's alternative costume in Armageddon is his cyborg form

Smoke in Defenders of the Realm 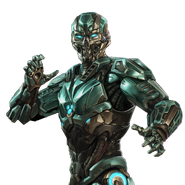 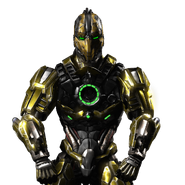 Cyrax variation of Triborg in MKX 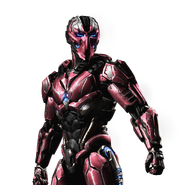 Sektor variation of Triborg in MKX 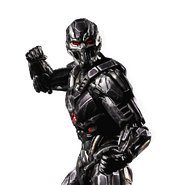 Smoke variation of Triborg in MKX
Community content is available under CC-BY-SA unless otherwise noted.
Advertisement