The Crown of Shinnok, also sometimes called Shinnok's Crown, is a crimson-ruby, ornate, spiky crown that is a sacred headpiece worn by the fallen Elder God Shinnok himself. It appeared on Shinnok's head, replacing his old headdress from MK4, MK Gold, and Mortal Kombat Mythologies: Sub-Zero. It made its grand appearance in Mortal Kombat: Armageddon, as well as a collectible Relic within the game's Konquest mode. It is located in the Netherrealm Cliffs.

The sacred Crown of Shinnok is a crimson-ruby, ornate and spiky crown that is shaped like a spine or the head of a dragon. It is designed by the same corrupt deity, the fallen Elder God Shinnok.

Since it was crafted by and belonged to Shinnok, who is both a former Elder God and the undisputed supreme master of the unholy Netherrealm, the Crown of Shinnok, like the Sacred Amulet itself, is also another ancient and forbidden treasure, still considered and revered as holy within the fanatical religion of the diabolical cult known as the Brotherhood of Shadows whose terrifying zealots still serve their divine master faithfully and without question as they continued to invade and conquer all realms, convert victims and nonbelievers into his believers and servants, and destroys enemies and all that is good in his name.

Shinnok, along with his sacred crown, makes a brief cameo in the ending of Mortal Kombat (2011). Shinnok is pleased with his new plans coming to fruition thanks to the efforts of his powerful disciple Quan Chi. According to him, Shinnok himself will soon be free and his dark forces of the Netherrealm will conquer Earthrealm and Outworld.

Further knowledge of the Crown of Shinnok including hidden mystical powers it may have been imbued with by its maker, and the danger it poses remains a mystery.

In 2015, Mortal Kombat X brings two new head pieces for Shinnok. For his primary costume, which dates the events of what would be approximately equivalent to Mortal Kombat 4 times, the fallen Elder God uses a new style for his crown, with only its front containing the famous spikes. This option was made to combine regal and religious elements with twisted details, representing the corruption of the character and giving him more confidence. For his second appearance in the game, his headdress clearly takes the form of diabolical horns, showing a more menacing and predatory appearance than religious.

Lord Shinnok with his old headdress alongside his Sacred Amulet in Mortal Kombat Mythologies: Sub-Zero. 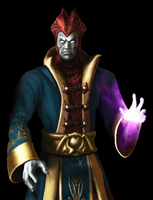 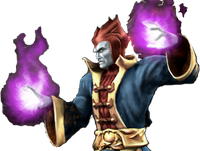 The fallen Elder God Shinnok along with his sacred crown in Mortal Kombat (2011).

Crown of Shinnok aka Shinnok's Crown in Konquest. 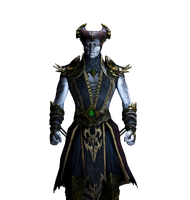 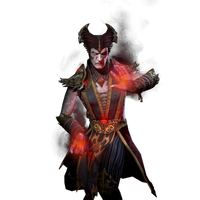 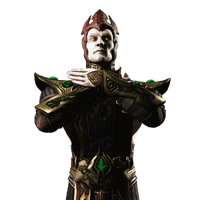 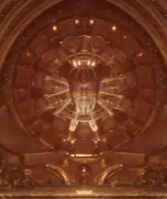 Retrieved from "https://mortalkombat.fandom.com/wiki/Crown_of_Shinnok?oldid=360766"
Community content is available under CC-BY-SA unless otherwise noted.