The Cape of Fujin is a celestial and royal cape that belongs to Earthrealm's wind god Fujin. It made its original appearance in Mortal Kombat Mythologies: Sub-Zero and later reappeared in its updated version in Mortal Kombat: Armageddon as a collectible Relic called Fujin's Cape within the game's Konquest mode.

This celestial and royal cape was bestowed upon the Earthrealm deity Fujin, when he became the God of Wind, and it has adorned his back for millennia ever since.

Fujin wears his ancient cape as part of his alternate costume in Mortal Kombat: Armageddon.

Some of Fujin's Skins/Costumes in MK11, have him wear the cape as well. 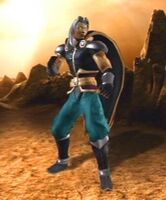 Fujin wears his cape in his alternate costume in Mortal Kombat: Armageddon.