The Bridge of Immortality is a cryptic ancient stone bridge that's named after the Sea of Immortality over which it spans. It connects the Prison of Souls, as well as the dark world's solid landmass, to the Pyramid of Shinnok. It's location is nestled deep within the Netherrealm. This huge bridge is heavily guarded by the Keepers, beings who keep trespassers away and attack enemies on sight.

The Bridge itself, like the Pyramid of Shinnok, was also built and existed as a monument to its history as the battered remnant and constant reminder of the old battleground reminiscent of the fallen Elder God's battles with previous enemies, including the Netherrealm's former master millennia ago.

During the events of Mortal Kombat Mythologies: Sub-Zero, Sub-Zero, having recently escaped from the Prison of Souls, had to cross over the trap-laden bridge and obtain three golden, ancient key-like relics called Fortress Icons from the Keepers of the bridge in order to gain access to and infiltrate Shinnok's Fortress during his quest to retrieve the forbidden Amulet of Shinnok. 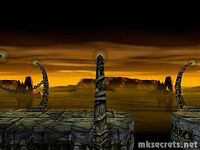 Fortress Icons, keys to the Pyramid of Shinnok
Add a photo to this gallery
Retrieved from "https://mortalkombat.fandom.com/wiki/Bridge_of_Immortality?oldid=216558"
Community content is available under CC-BY-SA unless otherwise noted.