Start a Wiki
The Bowie Knife was a style of fixed-blade knife used as a tool, as well as a weapon of choice.

The Bowie Knife first popularized by Colonel James "Jim" Bowie in the early 19th century. It was first made by James Black, although its common use refers to any large sheath knife with a clip point.

The "Jim Bowie knife" first became famous due to Bowie's use of a large knife at a duel known as the Sandbar Fight. The knife pattern is still popular with collectors; in addition to various knife manufacturing companies there are hundreds of custom knife makers producing Bowies and variations.

The Bowie Knife was Johnny Cage's weapon in Mortal Kombat 4.

This weapon is dual wielded by Kano in Mortal Kombat X and appears in every variation except Cybernetic where he uses his more iconic Knives instead. 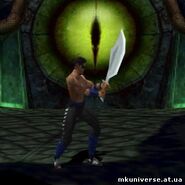 Johnny Cage's Bowie Knife
Add a photo to this gallery
Retrieved from "https://mortalkombat.fandom.com/wiki/Bowie_Knife?oldid=314823"
Community content is available under CC-BY-SA unless otherwise noted.