Start a Wiki
The Bow and Arrow is a long range weapon used by many warriors in ancient cultures in many ages. It is used by Nightwolf in every generation, who is himself a descendant of Native Americans (one of the ancient warriors that used them).

The Bow is a flexible arc that is able to shoot projectiles, the arrows. It is used as a long range weapon and was used thousands of years ago.

The bow and arrow was a long range weapon founded after the sling and the spear (to throw like javelin). The first arrow was probably used 64,000 years ago, it was found in a Sibudu Cave in South Africa. In Northern Germany, there were Stellmoor bows found, actual bows and arrows that were used as how we treat them nowadays. In Ancient Greek, they were used, a list of where (or when) they were found and who used them:

There are several warriors all over the world, most of them copied from the Greek and thus the warriors used it themself to dominate other enemies.

Scynthians with bows and arrows. 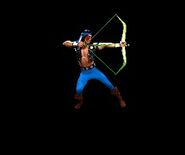 Nightwolf right before shooting an arrow from his bow.

Kung Jin with his Bow and Arrow in MKX.

Kratos using the Bow of Apollo in Mortal Kombat (2011).

Taven's Bow in the Beta of Mortal Kombat: Armageddon. Taven does not use a Bow in the final version.

Nightwolf's Bow and Arrow in MK11

Kung Jin's Arrow in MK11
Add a photo to this gallery

Retrieved from "https://mortalkombat.fandom.com/wiki/Bow_and_Arrow?oldid=332734"
Community content is available under CC-BY-SA unless otherwise noted.