About the Black Dragon

While the Black Dragon garnered notoriety around the world, the Red Dragon marked every renegade for death, and the United States government formed the Special Forces to deal with the activities of both clans. Jax Briggs, a Major in the Special Forces, was able to track down and destroy the Black Dragon following their escape from prison, killing all but Jarek, who was presumed dead, on his mission to arrest Kano, the leader of the Black Dragon, and stop him from retrieving an artifact of great power called the Eye of Chitian. Jax defeated Kano in a fierce battle and arrested him. Kano did not stay in custody for long, however, as he managed to escape and entered Shang Tsung's Mortal Kombat tournament, followed closely by Lt. Sonya Blade and her unit. Though Sonya was at a severe disadvantage with her unit massacred and forced to compete in the tournament held there, the tournament would also be the beginning of the end of what remained of the Black Dragon.

After the tournament, Shang Tsung fled to Outworld, taking both Sonya and Kano captive to appease Shao Kahn and to lure the other Earthrealm warriors to Outworld to compete in a second tournament. During this tournament, Jax rescued them both, but Kano soon escaped back into Outworld. He was able to convince Shao Kahn to spare his life in exchange for his assistance in training Outworld's army how to use modern weapons. Through deceit and trickery, he even made it to general after Kahn's foiled invasion of Earth, feigning death. Kabal, a former member of the Black Dragon, turned away from his criminal life to become a force for good.

Thought to be the last member of the Black Dragon, Jarek fought against Shinnok alongside Jax and Sonya. After Shinnok's invasion of Heaven foiled, Jax dropped Jarek off a ravine, seemingly killing him. Jarek survived the fall by thrusting his weapon to the side of the cliff, but he was badly injured. Jarek went into hiding and the Black Dragon was thought to be completely eradicated.

The Red Dragon was persistent in eradicating all those who had once belonged to the Black Dragon, however. When the Deadly Alliance assumed power over Outworld, Mavado, one of the Red Dragon's operatives, defeated the swordsman Kenshi for them, and in exchange was given the opportunity to fight Kano, although it's unclear whether or not this transpired. Reportedly, he had already killed Kabal in combat. But unknown to him, Kabal was saved from the brink of death by Chaosrealm cleric Havik. Though Kabal had renounced his life of crime, Havik was able to rekindle his anarchist ideals. After taking revenge on Mavado, Kabal reforged the Black Dragon more as an ideological than a purely criminal organization, and vowed to learn from its past mistakes. Together with his two new recruits, Kira and Kobra, he travelled to Outworld to assist Havik in his schemes and test the strength of his new gang. Kabal's aims seem to go further than Kano's. While Kano was content to be a common gang leader, Kabal wishes to tear down society. Kano was captured by the Red Dragon and was going to be used as a test subject for combining humans with dragons, but he escaped before they could finish. Jarek also returned apparently alive after his ordeal with Jax, who dropped him into a ravine, having plunged his weapon into the sides of the cliff as he fell to escape death. It is as yet unknown if he has returned to the Black Dragon, as his current agenda involves perfecting his fatalities enough so that he may take revenge on the traitor that sold him out (an agenda apparently aided by Quan Chi, who informed him that the final battle of Armageddon would prove to be the perfect venue to test out his fatalities). All Black Dragon members would die in Armageddon, effectively ending the clan once and for all.

Events would play out in a similar manner to the original timeline, with Kano still being the leader of the Black Dragon, but having infiltrated the Special Forces at some point to sabotage their investigation into the clan. This earned him Sonya Blade's hatred and cost him his eye at Jax's hands, though Kano would simply replace it with his optic implant. Kabal also left the group to become a police officer, having become disillusioned with them and crime.

Kano took part in the Mortal Kombat tournament held on Shang Tsung's island, and after Tsung lost, retreated with his forces to Outworld. There, Kano struck a deal with Outworld emperor, Shao Kahn and the soul stealing sorcerer, Shang Tsung, selling them arms in preparation for their invasion of Earthrealm.

During the invasion of Earthrealm, Kano saved Kabal's life after he was burned by the Shokan, Kintaro, and gave him the prosthetics he would need to survive the damage done to his lungs. Kabal was outraged by this and attacked Kano, escaping Outworld shortly after.

Years after Outworld's invasion into Earthrealm and the event known as the Netherrealm War, the Black Dragon still remain active. Their arms deal with Outworld also remained intact with the new emperor, the Osh-Tekk Kotal Kahn, who had his enforcer Erron Black handle the transactions.

Kano attempted to steal a Kamidogu being held by the Red Dragon clan but lost it and his original optic implant to Kuai Liang. Black Dragon members Jarek and Tasia were involved in the kidnapping of Cassie Cage and Jacqui Briggs on Erron Black's orders, taking the girls to Outworld and holding them hostage to be given to Kotal Kahn. There, Black and Kano, along with their forces, would face the Red Dragon led by Mavado.

The two warring factions would face off, but the Red Dragon won the battle with their superior numbers, killing all the Black Dragon soldiers save Kano, the mercenary stealing Kotal Kahn's Portal Stone from Erron Black to escape, leaving Black to be brutally cut down by Mavado and the girls captured by the Red Dragon.

Several prominent members of the Black Dragon reappeared in the last stages of the Shokan Uprising in Outworld. Kano, with Jarek, Tasia, and Tremor, offered the clan's services to help Kotal Kahn achieve victory. Kotal Kahn accepted, and the Black Dragon bolstered his weakened forces. Kano had Tremor cause a massive earthquake that threw the Shokan and Oni Warlords off balance before following up with a hand-held nuclear device that wiped out half of Kintaro's forces.

Though Kotal Kahn achieved victory through peaceful negotiations, he refused to pay the Black Dragon for their aid, and took back the Portal Stone stolen by Kano before subduing him and locking him and his companions in the Outworld palace's dungeon for their role in the kidnapping of Cassie Cage and Jacqui Briggs.

At least Kano would eventually be freed from the dungeons, and he would begin secretly selling arms and information to both Kotal Kahn and Mileena during their civil war. This culminated in Kano eventually stealing Shinnok's Amulet from Special Forces on Earthrealm and selling it to Mileena. The deposed empress would hire Kano to assassinate Kotal during a preemptive strike on the emperor's convoy. Kano failed to kill Kotal and barely escaped with his life.

Fleeing back to Earthrealm, Kano hid among the refugees of Li Mei's village, murdering a few at his leisure. Kano would be confronted by General Sonya Blade and defeated, only spared from death at the enraged Sonya's hands at Johnny Cage's insistence of needing him alive to find the Amulet of Shinnok. Kano's fate after this is uncertain, though it is presumed he was taken into custody of the Special Forces.

Kano made his escape from the Special Forces and was able to enlist the Black Dragon to work with Kronika. When the Timequake occurred, past versions of Kano and Erron Black would emerge. They would soon appear in the Kytinn's old hive in Outworld when D'Vorah rescued Shao Kahn from being killed by his former general, Kotal Kahn. Kronika soon appeared before them with Frost and Geras at her side. She offered the Black Dragon true domination of Earthrealm if they allied with her. After Sub-Zero and Scorpion defeated Sektor and shut down the Cyber Lin Kuei Assembly, the Black Dragon bring Sektor's deactivated body to Kronika's Keep. During their conversation with Geras, the present version of Kano makes an appearance to convince his past self to ally with Kronika. He succeeded, and the Black Dragon were tasked with tracking down the Special Forces and destroying their base.

One episode of the animated series Mortal Kombat: Defenders of the Realm featured the Black Dragon crime syndicate who appeared alongside their leader Kano.

A band of thugs appeared suddenly one evening to claim the Reyland family trading post as their own. Their leader, a beautiful, aggressive woman named Jola, revealed to Kung Lao that the deceased Baron Reyland had been a fraud with many debts owed to the Black Dragon over his lifetime. Siro was familiar with the organization that held a monopoly on drugs, prostitution, and money laundering in Zhu Zin, effortlessly destroying any opposition. The successful defense of the trading post by Kung Lao and his friends led Jola to desire stronger methods of coercion.

Centuries ago, the Black Dragon had been privy to the mystical powers of an actual black dragon, which granted their user powers over fire, but ultimately corrupted him into death. The Black Dragon had sealed the powers within a medallion to be guarded by the group's leader, and they lay forgotten for generations. Jola, recalling the ancient legends, desired to unleash the mystic powers once again. Her demand was harshly overturned by her father Bannak, the Black Dragon leader, and her brother Kebral, the second-in-command.

Jola refused to be denied her wish. Coldly murdering her father in secret, she brought the dragon medallion to her old ally and lover, Shang Tsung, in the cobalt mines of Outworld. Despite the sorcerer's admonitions for her to abandon the deadly powers, Jola was adamant to shape a new future as leader of the Black Dragon. In return for unlocking the powers, Shang Tsung demanded Kung Lao's death by them. Jola consented, and the abilities were unleashed, imbuing her with the power to hurl blasts of flame.

Jola turned on her brother, murdering Kibral as easily as her father, and assumed leadership of the Black Dragon. She confronted Kung Lao in a deadly fight which was made even deadlier by her fiery powers, but she was forced to flee when she felt herself being consumed by the strength of the forces within her. Shang Tsung rescued her and brought her to the mines in Outworld to recover, but denied her leave as his price for her failure. While she mastered the powers, Jola would be Shang Tsung's servant. She was not heard from again in the series.

The Black Dragon were never encountered again, but Raiden warned Kung Lao and his friends to remain cautious, as the evil they represented would not die with Jola's absence. 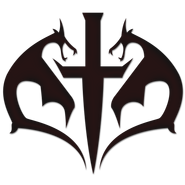 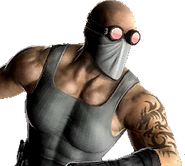 A Black Dragon member from the MK 2011 Challenge Tower.

Black Dragon Merc's getting beat up

A balisong knife with the Black Dragon Logo behind it.