The Belt of Daegon is an ancient belt with the gold emblem of the Red Dragon clan on it. It belongs to the clan's founder, lord and master, Daegon. It first appeared along with him in Mortal Kombat: Armageddon as well as a collectible Relic called "Daegon's Belt" within the game's Konquest mode.

The front of this belt is adorned with the gold symbol of the Red Dragon clan. Yet, this belt is the embodiment of evil. When worn by Daegon, the gold Red Dragon symbol on its front is said to seethe with evil. 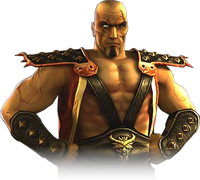 Daegon the founder and Grandmaster of the Red Dragon Clan, still wears his ancient belt. 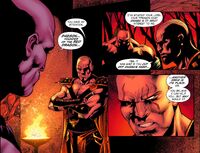 Deagon, still wearing his belt in his appearance in the MKX comics.
Add a photo to this gallery

Retrieved from "https://mortalkombat.fandom.com/wiki/Belt_of_Daegon?oldid=353636"
Community content is available under CC-BY-SA unless otherwise noted.