In Mortal Kombat 3 (originally referred to as the "Shao Kahn Tower") and its updates, opponents can be uppercutted to a bed of spikes similar of that of The Pit. The spikes are located several floors down, in the basement, and the opponent will be sent through several floors before reaching the spikes.

In Mortal Kombat: Armageddon, an opponent can be uppercutted into a spike with four sharp edges. As the opponent slowly comes down and ends up being impaled on the spikes and sharp edges cut their legs and arms, a small rat-like creature then appears and takes the left leg for use as food. In Mortal Kombat: Armageddon, a death trap on the Bell Tower works only on the lower stage and only after "Finish Him/Finish Her" is said.

The Bell Tower appears in Mortal Kombat (2011), and rats and ravens are also visible. This version takes place during the day instead of the night. Other changes are that it appears to be a clock tower, as well as it being located between St. Dominic's Cemetery and Boon*Beran Station in a city within Earthrealm and is featured in the Story Mode of Mortal Kombat (2011) under the name Vogel University. Despite its clock tower appearance, the stage is still named the Bell Tower, as there are several bells located around the inner-workings of the tower. 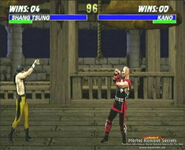 The Bell Tower in Mortal Kombat 3.

The spikes in the basement of the Bell Tower in MK3.

Cyrax and Kitana fighting at the Bell Tower in MK 2011. 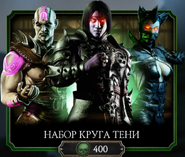 Cameo in MK mobile game.
Add a photo to this gallery
Retrieved from "https://mortalkombat.fandom.com/wiki/Bell_Tower?oldid=327794"
Community content is available under CC-BY-SA unless otherwise noted.