A Babality is a Finisher introduced in Mortal Kombat II. The move allows players to turn their opponents into an infant version of the character. This infant version is often wearing only a diaper, although sometimes they are wearing either a full outfit or at least some additional lower-torso clothing.

To perform a Babality, the player must perform a special button combination for their character and have won the final round using only High or Low Kick. In Mortal Kombat 3 and its updates, Ultimate Mortal Kombat 3 and Mortal Kombat Trilogy, the player had to win the round without using Block. After a Babality is performed, the sound of a baby crying plays (presumably the protests of the now-infant opponent) and the victor strikes a winning pose as a music box playing the end portion of "Rock-A-Bye Baby" plays in the background. The announcer proclaims: "[victor] wins; Babality!" In Mortal Kombat 3 and its updates, the generic green "Babality!!" text used in MKII is replaced with pastel colored, lettered building blocks. The blocks fall from the top of the screen and spell out "BABALITY" as a short lullaby plays.

Exclusive to the Nintendo 64 version of Trilogy is the "Reverse Babality" finisher in which the loser is turned into a baby, but then immediately reverts back into an adult only a second later and promptly explodes, resulting in a Fatality. This is performed by the losing opponent pressing HP, LP, LK and HK when the finisher is performed.

Babalities made a return in Mortal Kombat (2011), where every character, including bosses, has a baby model. This time around, each character has a unique animation once they are turned into a baby, usually involving a humiliating or Friendship-like action with a signature trait of theirs to drive the point home. To perform a Babality, the player cannot block during the winning round. Bosses, however, have much harder conditions that, when fulfilled, will activate the Babality automatically.

Baraka: Hisses and takes out his Tarkatan Blades, but they fail to drill through the floor, lifting him into the air and leaving him there. He cries as he tries to get free.

Cyber Sub-Zero: Plays with one of his Ice Bombs until he drops it and freezes himself in a block of ice. He can be heard crying while frozen.

Cyrax: Rolls around one of his bombs, but it explodes, making him cry in fear.

Ermac: Uses his telekinesis to levitate off the ground, but cannot stop himself and is left continuously levitating from his telekinesis, crying in fear.

Freddy Krueger: A stroller appears. The camera pans inside to reveal a teddy bear with slash marks on it, as Freddy's squeals can be heard. He then pops up on the side of the stroller ready to strike, but misses his intended target, as his hat is covering his eyes. Confused, he looks around frantically.

Goro: Plays patty cakes with himself before accidentally slapping himself in the face. He then sits down and cries in pain. To perform a Babality on Goro, you must play the game on Medium or higher difficulty, not use continues, and perform a Babality on Shang Tsung in his base form (not transformed). Then you cannot block on the winning round against Goro.

Jade: Throws her Triblade while giggling, but it comes back and hits her on the head, making her cry in pain.

Jax: Drops to his knees and pounds his arms into the ground while throwing a tantrum and crying in frustration. Miniature shockwaves can be seen emitting from where he punches.

Johnny Cage: Sits down, takes a blue crayon out and starts drawing on a piece of paper, then throws it at the screen while cooing and giggling. The paper is an autograph with a poorly drawn picture of himself, bearing the words "To my best fan, Johnny Cage", very similar to his MKII Friendship, and also a reference to the first movie.

Kabal: Attempts to do a Raging Flash against his opponent, but goes too low and does a nose dive in the ground. He then throws a tantrum and cries a puddle of tears like Scorpion and Mileena.

Kano: Gives a cutthroat sign, but his metallic eye, now too heavy for his infant body, causes him to fall over. He desperately tries to lift himself up, but fails and starts crying in frustration. Curiously, Kano retains all his facial hair in his baby form.

Kenshi: Pulls out his sword using his telekinesis. He waves his hand, but the sword's handle keeps hitting him in the back of the head. After being hit a third time, the sword flies away and he starts crying in pain.

Kitana: Pulls out her fans and tries posing, but the wind blows her and the fans around, and she falls hard on her bottom, crying in pain. Her fans fall and lodge themselves in the ground beside her.

Kintaro: Notices a nearby bowl of milk and meows as he crawls on all six over to it and starts lapping it up like a kitten, purring happily. To perform a Babality on Kintaro, you must play the game on Medium or higher difficulty, not use continues, and perform a Babality on Shang Tsung in his base form (not transformed). Then you cannot block on the winning round against Kintaro.

Kratos: Steps on a plush Medusa doll and, after a couple pulls, he rips off the head with a victory roar, holding it triumphantly as the stuffing falls from it. It should be mentioned that this is the same way he kills Gorgons in the games. Also, just like Kano, Kratos retains his beard from his adult version.

Kung Lao: Tosses his hat, and a TaiGore (a reference to his MK3 Friendship) runs him over, knocking him out of the way as Kung Lao lands on the side. He sits up and starts crying in pain.

Liu Kang: Gives a high-pitched version of his MKII kiai and tries performing his Cartwheel Kick, but trips during the middle portion, making him cry in pain.

Mileena: Hisses and charges toward her opponent, but trips and falls forwards, proceeding to throw a tantrum and cry a puddle of tears like Scorpion and Kabal.

Nightwolf: Picks up an inflatable tomahawk and giggles in joy, but accidentally summons a wolf spirit. As the wolf howls, he gets scared, and shivers on the ground crying in fear.

Noob Saibot: Accidentally creates a portal above and below him, causing him to fall continuously between them in a comedic fashion, crying as he goes.

Quan Chi: Creates a portal on top of him with his arms and attempts to scream until it drops a green skull on his head, making him cry in pain.

Raiden: Summons lightning à la Kidd Thunder and places his hands happily on his hips but, due to being unable to control it, a stray lightning bolt strikes beside him, making him shiver while curling into a ball and crying in fear.

Rain: Summons a cloud above him, but begins to cry once it rains heavily on him.

Reptile: Instead of turning into a baby outright, he turns into an egg and hatches, spitting acid out of his mask and gooing happily.

Scorpion: Faces his opponent and attempts to shoot his spear (complete with high-pitched "GET OVER HERE!"), but trips while trying to shoot it. He then throws a tantrum as his tears make a puddle on the ground like Kabal and Mileena.

Sektor: Plays with one of his rockets, which activates and sends him flying upwards offscreen. As he lands hard on his bottom, he starts crying in pain.

Shang Tsung: Sucks out the soul of a teddy bear and sits contentedly, as if plotting.

Shao Kahn: Exclaims "NO!" as though he were about to die normally, but quickly notices the situation. Facing the winner, he decrees "You suck!" in a high-pitched voice, and then turns to the screen and laughs with both hands on his hips. To perform a Babality on Shao Kahn, you must play the game on Medium or higher difficulty, not use continues, and perform a Babality on every single opponent on the Arcade Ladder, including Shang Tsung and Goro/Kintaro. Beating Kahn in this way will skip your character's ending, but will still unlock the ending and the Alternate Costume (providing you have not already unlocked it) for them.

Sheeva: Looks around and notices that she has become smaller. She then jumps and stomps on the ground while throwing a tantrum and crying out of frustration.

Sindel: Attempts to levitate, but falls to the ground crying and Banshee Screaming uncontrollably in great pain.

Smoke: Farts while standing up, making him cry because of the smell.

Sonya: Does an upwards bicycle kick, but falls down to the ground, hitting back first. As she is on the ground, she spins around crying in pain.

Stryker: Pulls a gun out and bangs it on the ground, causing it to go off but falls down because of the recoil and cries.

Sub-Zero: Urinates on the floor, and the puddle freezes, making him slip and as he's sitting near the frozen puddle, he starts to cry in pain.

Liu Kang Performs a Babality on Kabal in MK3 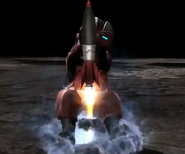 Baby Sektor (robotic) being carried by his rocket.

Baby Cyrax (human) playing with one of his bombs.