Ba Shan Fan is a fighting style used by Hotaru in Mortal Kombat: Deception, then by Sareena in Mortal Kombat: Armageddon. Although it is called Fānziquán today, it was originally called Bāshǎnfān until the Ming Dynasty. It has been used for its speed, and combined with other styles to make them more effective.

Ba Shan Fan's orgin go all the way back to the Song Dynasty but, the boxing manuals and theories date back to the Ming Dynasty. During the Ming period, a general by the name of Qi Jiguang possessed a book called Jixiao Xinshu, and in chapter 14 of that book showed Ba Shan Fan as a fighting style at that time. Ba Shan Fan manuals reveal that during the Ming Dynasty that an injured warrior named Wang Zhiquan was taught the style by a wanderer after receiving medical attention from him. The style was then passed downed through various generations in the northern provinces, and soon the style had spread throughout the counties of the Hebei Province with each county adding their own twists to the style.

Ba Shan Fan is made up of a few key principles from which the style is based on and developed on. A basic key to the style is to rotate, being able to turnover an opponent's offense or defense or displace it completely with an attack. Ba Shan Fan is filled with solid and rapid movements with explosive energy and these movements are done in a single breath which gives opponents the feeling that they are defenseless against it. This is not a chain of the same technique but rather a chain of many angled full power attacks and defensive and attack based methods.

The Basics of Ba Shan Fan require the sight, waist, stance/step, hip, elbows, knees, and shoulders to be coordinated, flexible, and strengthened. To development, the basics of the style one must study many short basic techniques such as these.

A few of the practices above are grouped into what is usually called Yue Jia Shi Ba Chui (18 strikes of the Yue family), some are even practiced together in what is called Zheng Ba Fan. Training in Ba Shan Fan at the beginning relies on its key basic movements, and it is a combat effective style relying of fast deceptive movements with rotating methods for aggressive attack methods. Even though these techniques may seem to be quite chaotic to the opponent, it takes mastery to be sure that every movement with timed and coordinated to perfection. The Forms of Ba Shan Fan are actually more like sets of training methods, some are individual techniques while others are chains of techniques and some are actual forms.

This set of techniques is more difficult to master than the previously mentioned sets, and introduces the concept of continuous linkage. While Ba Fan Shou focuses on how to change a strike, Ba Lian Shou focuses on the same thing but with continuity.

This is an advanced set of techniques where change is now possible in a continuous fashion but, include midstrike modification and how to predict the reactions of opponents. Applying the correct methods to succeed based the force of the opponent's strikes. 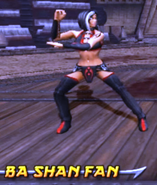 Sareena's Ba Shan Fan.
Add a photo to this gallery

Retrieved from "https://mortalkombat.fandom.com/wiki/Ba_Shan_Fan?oldid=331779"
Community content is available under CC-BY-SA unless otherwise noted.