Start a Wiki
The Axe is a weapon used by Ermac in Mortal Kombat: Deception and Mortal Kombat: Armageddon. This is Ermac's trademark weapon in those two games, along with his telekinetic powers. The Axe can be used by a created character in Armageddon. It is also used by Scorpion in Ultimate Mortal Kombat 3 and Mortal Kombat Trilogy. It is similar to a battle axe, but with only one bladed side on the head, closely resembling an Ono.

The origins of the axe could be somehow related to those of Ermac himself, which explains the emblem's incredible resemblance to Ermac's gem.

In Story Mode of Armageddon can be seen dead Masked Guard's axe. 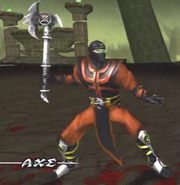 Masked Guard's Axe in MK: Armageddon
Add a photo to this gallery
Retrieved from "https://mortalkombat.fandom.com/wiki/Axe?oldid=312122"
Community content is available under CC-BY-SA unless otherwise noted.