The Army of Darkness is an army, largely made up of demons and other hellish entities, created by Shinnok during his banishment in the Netherrealm.

After his escape from the Netherrealm with the help of the demon sorcerer Quan Chi, Shinnok used this Army of Darkness to invade Edenia. However, Raiden and the Earthrealm warriors were able to stop Shinnok's advance, and his army was eventually defeated.

The unholy army of Shinnok can be seen in the official Mortal Kombat 4 comic book where some of the demons tried to kill Fujin, who was saved by Raiden, Liu Kang and Kai.

The Army of Darkness would later make their first appearance in a game in Mortal Kombat X's Story Mode, where they are seen causing destruction to Earthrealm as its armed forces try to stop their attack. Shinnok's army would also attempt seizing the Sky Temple so that Shinnok could access the Jinsei Chamber and therefore corrupt it, but they were eventually defeated as Shinnok was imprisoned within his own Amulet.

An Oni, presumably a member of Shinnok's army, also makes a playable appearance in the mobile version of Mortal Kombat X. 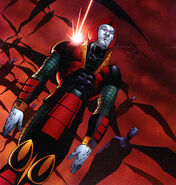 Shinnok and his army.

Fujin, as he is attacked by Shinnok's army.

A demon about to kill a soldier during the Army of Darkness' attack on Earthrealm.

Corrupted Shinnok summons two demons from his army in his MKX Fatality.