Argus is the father of Taven, Daegon and Rain who makes his first appearance in Mortal Kombat: Armageddon.

Argus is one of the Gods of the realm of Edenia, as well as its great, divine Protector, assigned to defend it from threats of outside forces. He is also the husband of the powerful Edenian sorceress named Delia.

Argus is the most powerful of the Edenian Gods. Due to visions of a future apocalypse caused by the growing number of fighters spawned from the Mortal Kombat tournament, as seen by his wife Delia, he was assigned by the Elder Gods to come up with a solution to prevent this from happening. Argus planned to destroy the kombatants to prevent Armageddon, but Delia protested to this, pointing out that "some were heroes, undeserving of death". He came up with a solution to prevent Armageddon: a contest between his sons, Taven and Daegon. They would race each other to the top of his pyramid and defeat the firespawn of his wife's creation, Blaze, with the mystical weapons and suits of armor that he and Delia had given them to find. With Blaze's defeat, depending on which one of the brothers defeated him, not only would they gain full godhood and replace Argus as Protector of Edenia, but the excess energies from Blaze would be absorbed by their armor and either kill or nullify the special powers of the other kombatants, preventing their fighting from tearing the realms apart. Argus created several obelisks for his sons to train in on their journeys, where he and Delia had left their images in.

Argus and Delia were supposedly killed by Daegon shortly after their son's premature revival. However, Daegon's ending reveals both of them may still be alive. In some endings, such as Rain's and Bo' Rai Cho's, it is also implied they are still alive.

In Rain's ending, it is revealed that Argus is also Rain's father, although he was born from another mother, making him the half-brother of Taven and Daegon.

In a huge ironic twist of fate, the ending that would've achieved the deaths of all the other kombatants, and thus the intended stoppage of Armageddon, was that of not any of his three sons, nor any prominent character from the Mortal Kombat series past, but the considered joke character Mokap.

In Rain's Mortal Kombat (2011) ending, after Rain defeats Shao Kahn, the thunder god Raiden takes him to Edenia to learn about Rain's origins. He shows him a statue of the Edenian god Argus, who was Rain's birth father. Rain understood his lost heritage, that he was Argus' direct descendant. But with his divinity confirmed, his path was clear: Rain would amass and lead a legion of followers, including those of Shao Kahn's militia, to conquer not only Outworld but all the realms, including Raiden's Earthrealm as his first target. Though this ending is non-canon, Rain would learn his divine heritage by the time Mortal Kombat X's story takes place.

In Kenshi's Mortal Kombat X ending, Argus is revealed to have been murdered by his son Daegon as he was in the original timeline.

In Rain's Mortal Kombat 11 ending, Rain discovers the truth of his parentage at last: He learns Argus had a affair with his mother, the Edenian woman Amara, but when Rain was born, Argus lied to Amara, claiming Rain had been stillborn, when in truth, Argus had given the newborn to commoners to hide the truth of his affair. Amara would die later from grief, and Rain, seeking vengeance, would kill both of Argus' sons by Delia, while leaving her alive to suffer as his mother had.

Argus and Delia discussed the solution to prevent Armageddon

Blaze remembers his true origins and also both Argus (God of Edenia) and Delia (Blaze's creator). 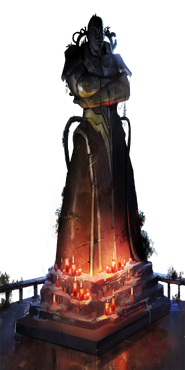 A statue of the Edenian god Argus in Rain's MK 2011 ending.

Argus murdered by his son, Daegon, in Mortal Kombat X.

Argus has stolen away his son (Rain) and left him to rot among peasants. (MK11 Rain's Ending)