Arctika is an icy tundra region located within China in Earthrealm. It is a location in Mortal Kombat: Armageddon's Konquest mode, and is also an unlockable arena to select in versus mode.

This snowy and icy region is home to the Lin Kuei, the Tengu Clan, and (as revealed in Mortal Kombat: Armageddon) the Temple of Delia.

There are many traps set in Arctika such as spinning blades and hammers that send the player flying into spikes.

This arena is set in desolate bitter ice. It is rumored that those who were unlucky enough to find themselves lost in Arctika's vastness would eventually be hunted down and killed by members of a mysterious clan. You battle Sonya and Rain in Mortal Kombat: Armageddon Konquest in this arena. 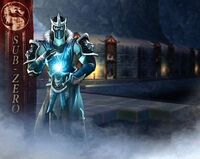 The Lin Kuei Palace in the background in MKD and MKU. 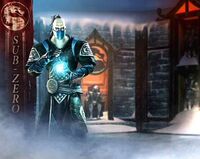 The Lin Kuei Palace in the background in MKD and MKU.

The Lin Kuei Palace in the background in MKU. 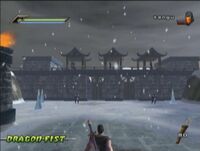 In the background, the cold mountains that are promenient in the region.
Add a photo to this gallery
Retrieved from "https://mortalkombat.fandom.com/wiki/Arctika?oldid=318728"
Community content is available under CC-BY-SA unless otherwise noted.