The Arctic Monks were a group of holymen found in Arctika. They helped Taven to locate the Lin Kuei Temple, (formerly known as the Temple of Delia) if he rescued their abbot.

The Arctic Monks were worshipping an obelisk that was of Edenian design, meaning they were knowingly aware of the fact that the obelisk was created by Delia and her immortal husband Argus.

Monk is talking to Taven to help him 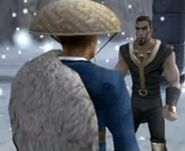 Add a photo to this gallery
Retrieved from "https://mortalkombat.fandom.com/wiki/Arctic_Monks?oldid=232754"
Community content is available under CC-BY-SA unless otherwise noted.