Before the events of Mortal Kombat: Deception, when Shujinko gathered all six Kamidogu and placed them on the altar in the Nexus, Onaga, the Dragon King of Outworld, appears to Shujinko and reveals that the seventh and final spot on the altar is meant for the Sacred Amulet -- Shinnok's Amulet, then in the hands of the sorcerer Quan Chi. Onaga then returns to Outworld to seek this amulet and begin to reshape the realms.

The sacred Amulet of Shinnok is the only one relic still revered as divine within the twisted religion of the Brotherhood of the Shadow, because it was the malevolent Elder God's most precious treasure and his greatest creation.

In the new timeline, the amulet was seen in Quan Chi's possession throughout the first two tournaments and Shao Kahn's invasion of Earthrealm. By the time of Shinnok's invasion, Quan Chi had returned the true amulet to Shinnok. The fallen Elder God used the amulet to nearly trap Raiden and Fujin inside it, only to end trapped himself after being defeated by Johnny Cage.

Shinnok would use the amulet to torture Bo' Rai Cho and absorb Earthrealm's Jinsei, taking on a more powerful, "Corrupted" form that had the amulet fused with his stomach. After Shinnok was defeated by Cassie Cage, Raiden purified the Jinsei, becoming corrupted himself, and claimed the amulet for himself after beheading Shinnok.

Raiden continued to wear the amulet as a symbol of his newfound intolerance against those who would harm Earthrealm. When Raiden had Special Forces lead a mission to destroy the revenant Liu Kang and Kitana's demon army, he used the amulet in conjunction with his lightning power to almost effortlessly fight the entire army off single-handedly. When the current era Raiden vanished due to Kronika's manipulation of time, the past era Raiden refused to use the amulet's power out of fear of it corrupting him as it had his counterpart, noting even away from it, he could feel the amulet tempting him.

Raiden eventually gave in to the amulet's siren call and used it to viciously torture the past era Scorpion when he returned in his present self's place. It was only after battling Liu Kang once again did Raiden have a revelation over the true source of his anger, and he dropped the amulet, refusing to use it anymore. What became of Shinnok's Amulet after this is currently unknown.

Shinnok's amulet makes a brief cameo in Raiden's Order of Light, where Kano attempts to steal the amulet before Liu Kang tells him to return it.

Shinnok's Amulet is one of the most powerful weapons in the Mortal Kombat universe. It symbolizes greatness in the magical arts and was the weapon that Shinnok used when he and the other Elder Gods waged war against The One Being. Anyone who wields the accursed amulet of Shinnok will increase their powers drastically. For example, when Shinnok wields the amulet, his main power, immortality, increased to the point of pure immortality, which is the ability to resurrect himself, thus never be vanquished. Another use of the amulet is teleportation via portal. These portals may teleport the user anywhere in any realm, as long as it is a real environment. Raiden states in Deception that Quan Chi only knows how to use a small fraction of the amulet's power, but this itself is enough to make him a tremendous threat.

As demonstrated in the new timeline, the amulet possesses the power to trap multiple beings inside itself, and unleash waves of crimson energy that can kill lesser beings instantly. However, out of Shinnok's or a demigod's hands, this power harms even the wielder. Raiden, in his corrupted state, even weakened by being in Netherrealm, was able to use the amulet combined with his control over lightning to single-handedly destroy wave after wave of demons rushing to attack him. 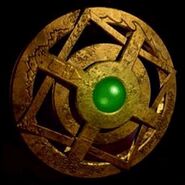 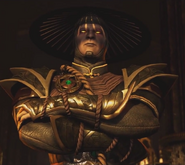 The Amulet in a recipe in Mortal Kombat 11. 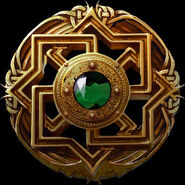