This ancient golden sceptre called the Amulet Staff, which is also known as the Staff of Shinnok, was the only weapon of the fallen Elder God Shinnok. This Amulet Staff is used to amplify the already great power of the Amulet of Shinnok. The amplification of the amulet's powers increase to the point of pure and virtually unlimited power, omnipotence even. This, for example, will cause the following chain reaction:

The Amulet Staff's actual origin and history is linked to those of the Amulet of Shinnok.

The Staff of Shinnok was another treasure considered as sacred by the Brotherhood of the Shadow since it was created by the evil Elder God himself.

Shinnok and Quan Chi in MK4. 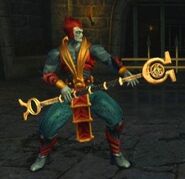 Shinnok with his Amulet Staff weapon in Mortal Kombat: Armageddon.
Add a photo to this gallery
Retrieved from "https://mortalkombat.fandom.com/wiki/Amulet_Staff?oldid=327269"
Community content is available under CC-BY-SA unless otherwise noted.