Start a Wiki
The conical Asian hat, sedge hat, rice hat, paddy hat or coolie hat is a simple style of conical hat originating in East and Southeast Asia, particularly Indonesia, Vietnam, China, Japan and Korea. It is kept on the head by a cloth (often silk) chin strap; an internal band of the same material keeps the hat itself from resting on the wearer's head. This style of hat is used primarily as protection from the sun and rain. When made of straw or matting, it can be dipped in water and worn as an impromptu evaporative-cooling device.

Because of its distinctive shape, it is often used in the depiction of East Asians. Recently, as part of international one day cricket matches in Australia, the conical hat has been a fashion phenomenon amongst spectators, with many decorated in Australian green and gold livery. Given that spectators are exposed for long periods in direct sunlight, the conical hat is a logical sun-safe device.

In mainland China and Taiwan, it is called dǒu lì (literally, a one-dǒu bamboo hat). In Japan, the hat is called sugegasa. In Korea, it is called satgat, mostly worn by Buddhist monks; in Vietnam, the name is Nón lá (leaf hat). The conical hat varieties in Vietnam are notable for their romantic and timelessly crafted adornments. Special conical hats in Vietnam contain colorful hand-stitch depictions or words while the Huế varieties are famous for their 'poem conical hats'. These contain random poetic verses and Hán tự which can be revealed when the hat is directed above one's head in the sunlight.

In the Mortal Kombat universe, this type of hat is worn by Earthrealm's thunder god Raiden (Raiden's Hat) and the ascending demon Ashrah (Ashrah's Sedge Hat). 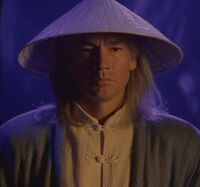 Raiden's hat in the first movie.

Raiden's hat in the comics. 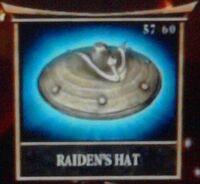 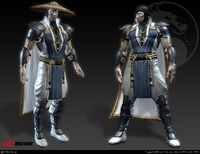 Raiden with and without his hat in MK vs DC. 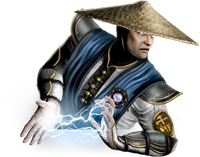 Raiden with his hat in MK 2011.
Add a photo to this gallery

Another render of Ashrah wearing her hat.

Ashrah's ending as it shows her wearing her hat.
Add a photo to this gallery

Retrieved from "https://mortalkombat.fandom.com/wiki/Asian_Conical_Hat?oldid=302458"
Community content is available under CC-BY-SA unless otherwise noted.